As a Muslim I don’t want sympathies, what I want is what everyone wants, a sense of security and letting me live my life as others live theirs. Throw me in a jail for the crimes I commit, but don’t blame me or my religion for the acts someone else commits. As fellow Americans this is what you can do for the other members of the family of faiths, and become a consistent voice to propagate the following narratives…. in the text below. Mike Ghouse

The MCPD Asst. Chief Darryl McSwain and Asst. Chief Luther Reynolds, and MC Fire Chief, Scott Goldstein shared their perspectives in developing safe communities.  Both the departments offer facility orientation programs, that is,  training and preparing the members of worship places to ‘what if’ scenarios in case of a gunman walking in,  a fire breaks out or any other untowardly events. 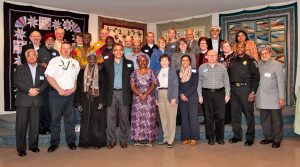 A member from each table shared the general conversation of his or her given table.  From our table, we shared the needs of various communities. Imam Hadji Sall from Silver Springs Mosque talked about the space needs for his Mosque, he and I have agreed to have a discussion and present the possible solutions to the group. There was an acknowledgement needed for bullying that goes on with Hindu kids along with Muslim and Sikh kids, Richa from the Chinmaya Mission shared that information.

Rabbi Gerry Serotta, Executive director of interfaith council of Washington shared about the upcoming Interfaith Bridge Builders Awards on June 2, event as a head of the Interfaith council of Metropolitan Washington, one of the pastors shared that they pray for both the victims and the offenders in case of crises.  Of course, Scott Goldstein shared what the Fire Department does in case of crises, he made it little humorous about catching the animals. 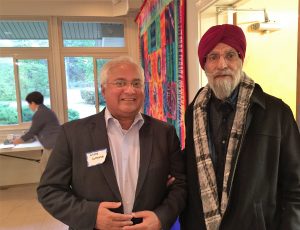 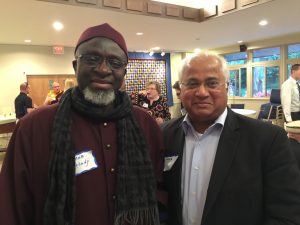 It was a joy to meet with Dr. Ajaib Singh Siddhu and his wife Hema, who are also friends with Dr. Harbans Lal since their college days. Hema said she and Harbans graduated from the same college in the same year, and she got the PhD and Harbans got his D. Lit.  Dr. Lal is a father figure to me, and I have always admired him and continue to seek his wisdom from time to time.

Great food, the families brought in so many varieties of vegetarian food which I have enjoyed at the Jain Temples in the past.

PROPOSAL TO THE GROUP

I am pleased to propose to the group, that in one of the upcoming meetings, we can facilitate a talk on the First Amendment; we will also hold a workshop on First Amendment at our facility at the United Methodist building soon. There is a continual need to understand the first amendment on a regular basis.  Please let me know the first time slot available to do this.

The discussion on how we are dealing with the recent violent incidents in Paris, Brussels, Lahore and our County, with members of our congregations. Let’s discuss practical ways we can reduce anxiety and xenophobia in our own communities, and continue to build a socially cohesive and compassionate county.

Dealing with violent incidents in Paris, Brussels, Lahore and here in the United States

The bottom line of every religion, government and the society is to create cohesive societies that function well, where rule of law is the norm, and where no one has to live in fear, or apprehension of the fellow beings.

It is our duty to keep law and order and faithfully guard the safety of every citizen. Hate is one of the many sources of disrupting peace in a society, and it is our responsibility to track down the source of such hate and work on mitigating it.  Ultimately, my safety hinges on safety of others around me.

There is wisdom in the saying, “Sin is the problem and not the sinner” when we focus on the sin, there is a chance to redeem the individual from the sin, where as if we attack the sinner, we will kill the chances of redemption. The idea is to single out the cause for the situation and work on finding solutions.

Similarly, we single out the criminal responsible for the crime,  and not  blame his or her spouse, parents, siblings, kids, family members, rabbi, imam, pastor, Pundit or religious leader, mayor of the town, governor of the state, president of the country or the religion.

If a rapist is running around in our neighborhood, everyone gets apprehensive and makes sure the doors are locked, alarm is set and family members are guarded. The moment that creep is caught, everyone sighs and takes a deep breath of relief.

What’s happened here is the “trust” is restored in the community; people feel safe and start living their normal life again.  There is nothing like feeling secure.  Indeed, Prophet Muhammad’s (pbuh) work was to build secure societies and he likened the sense of security to mother’s lap where the child feels secure. No matter what is happening to him/her, the child knows he or she is safe in her mother’s lap, the child knows mother will take care of him/her.  Mother is one’s security and trust is the key.

The Prophet’s vision of a civilized society was when a single woman loaded with Jewelry and fine clothing could go from the City of Madinah to the City of Damascus and return without being harassed, chased or robbed of her dignity. That was the kind of civility he had envisaged.   A majority of Muslims got that message right and have become the source of such civility; however a few did not get it and we have to work with them.

Those who did not get their religion right, no matter what religion, region or race they belong to cause death and destruction. The list is endless; Brussels, Paris, Grand Bassam, Ankara, Gaza, Mumbai, Bali, Abu Ghraib, Afghanistan, Iraq and several more across the globe including the latest rampages of ISIS.   Here at home we have San Bernardino along 354 Mass murders in 2015.   Individuals wear suicide vests and hurt others, while nations wrap mega ton bombs to their fighter jets and destroy nations and cities.  All of us should reflect on the ugliness embedded in a few men from each one of our faiths.

There is not a religion out there that preaches discrimination or hatred for others.  Isn’t that the case with Christianity, Judaism, Hinduism, Buddhism or any faith?  Religion doesn’t teach, but the Guardians make a villain out of God towards others. God is not a villain, he/she/ it is about justness, fairness, equity and kindness to the entire creation.

What can we do to cut down the fear mongering and pitting every one against Muslims?

As a Muslim I don’t want sympathies, what I want is what everyone wants, a sense of security and letting me live my life as others live theirs. Throw me in a jail for the crimes I commit, but don’t blame me or my religion for the acts someone else commits.

As fellow Americans this is what you can do for members of the family of faiths, and become  a consistent voice to propagate the following narratives;

Ten Reasons you should not fear Muslims – https://centerforpluralism.com/10-reasons-you-should-not-fear-muslims/

A Pakistani Turned Texan breaks down misconceptions about Muslims – https://centerforpluralism.com/a-pakistani-turned-texan-breaks-down-6-misconceptions-americans-have-about-muslims/

Dr. Mike Ghouse is an Executive Director of American Muslim institution and is a community consultant, social scientist, thinker, writer, news maker, Interfaith Wedding officiant, and a speaker on Pluralism, Interfaith, Islam, politics, terrorism, human rights, India, Israel-Palestine, motivation, and foreign policy. He is committed to building cohesive societies and offers pluralistic solutions on issues of the day. Visit him (63 links) at www.TheGhousediary.com