Council of Advisors – Individuals representing different faiths (and no faiths) and political parties.  Their role is to offer leadership in having their faith and political affiliation represented in our programs and outreach.  CFP is an all-inclusive organization.

——–
Dr. Harbans Lal of Dallas, Texas, US; is a highly acclaimed scholar and lecturer and was named Sikh of the Year Internationally in an event in London, England in 2013. 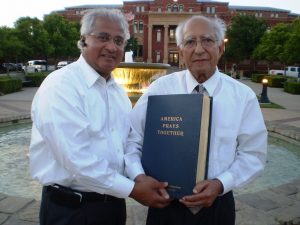 Emeritus Professor and Chairman, Department of Pharmacology and Neuroscience, the University of North Texas Health Science Center at Fort Worth Texas, and Emeritus Professor of Religious Studies, Guru Nanak Dev University at Amritsar, is a graduate of Punjab University. He received a Masters degree from the University of Kansas and a Doctoral degree from the University of Chicago. In academic circles, he is known for his research in the areas of behavioral medicine, substance abuse, and on prolongation of a healthy life span. He has served on many US and international science advisory boards including serving for 14 years as the Editor of a monthly journal, Drug Development Research.

During his academic career, he published over 400 research papers, 20 books, several research reviews and 56 chapters in technical books. U. of North Texas Health Science Center established a pre-doctoral fellowship award in his name and recognition. Society of Neuroscience held an International Symposium on Anxiety to recognize his research, and its Chapter of Scientists of Indian Origin recognized him with Award of Outstanding Senior Neuroscientist.

Professor Lal, being a Sehajdhari Sikh, is known as Bhai Harbans Lal. Since his school days, he has been active in promotion of Sikh interests. In 1954, he was elected as the President of the All India Sikh Students Federation. He was recognized by robes of honor by the Shiromani Gurdwara Prabhandhak Committee (SGPC), Delhi Gurdwara Management Committee, the Chief Khalsa Diwan, the Sikh Educational Conference, Sikh Dharma International and the Sikh Social and Educational Society. In 1995, Guru Nanak Dev University awarded him the Degree of Doctor of Literature (honoris causa) in recognition of his contributions in Sikh Studies. On April 14, 1999, the Anandpur SahibFoundation awarded him the Order of Nishan-e-Khalsa for his superb accomplishments in promoting the glory and pride of the Khalsa Panth.

Dr. Lal serves on many religious and humanitarian organizations. He is a member of the Interfaith Council of the Center for World Thanksgiving, The Interfaith Center at Fort Worth, and advisor to the American Project on Religion and the News Media, advisors-at-large to THE SIKH TIMES, and to the Sikh Foundation. He is a founding trustee of Bhai Nanad Lal Foundation and Founder Vice-President of the Sri Nanakana Sahib Foundation. Dr. Lal serves as the Founder President of the Academy of Guru Granth Studies established for the promotion of scholarly works on the Sri Guru Granth Sahib.

In Nov. of 2003 he made a presentation at the Sikh American Society of Georgia, US .

Dr. Karen Hollie-Thibodeaux’s life has been used greatly by God:  as a pioneer when He led her to establish Grace International Seminary in 2007; and as a trailblazer when He gave her the vision to plant a church where individuals can reach their greatest potential.

Her commission from God to plant a globally diverse, celebratory church is being fulfilled.  It is a church that will empower, enlighten, and encourage the unchurched, alienated, and the lost to a life-changing new beginning through teaching, preaching and evangelism.  Upon this premise, Lifeway Church of Dallas was founded with Dr. Hollie-Thibodeaux as the senior pastor.

She serves a clinical Psychotherapist and is president of Life Change Agents Enterprises.

Fatima Argun is an international marketing, strategic planning & management expert and business development executive with a developing expertise in organizational development, facilitation and conflict management.  Her experience includes work at senior levels with organizations such as Booz Allen Hamilton, the US Department of Commerce, The US Senate Judiciary Committee, MCI WorldCom, and the World Bank. She is presently engaged as a strategy consultant, representative, educator, advocate and fundraiser for NGOs and as an advocate to empower women through leadership and entrepreneurship skills.

Fatima serves her community in a number of capacities, including as a member of the Arlington County Democratic Committee Steering Committee, and Outreach Committee Co-Chair. She was recently elected to the Lee Highway Alliance Community Advisory Council.

Ms. Argun is an MBA graduate of the Johns Hopkins University. She has studied conflict management at the School for Advanced International Studies (SAIS) and the United States Institute of Peace. In addition, Fatima holds a Masters degree in Public Affairs (MPA) from the Lyndon Baines Johnson School at the University of Texas-Austin, and has studied at the Sorbonne in Paris, France. Ms. Argun is proficient in Turkish, and is conversant in French.