With the June 10th rallies over which occurred in 28 cities across the United States, where are we as a nation?

The answer is a simple one. We are further apart, more divisive and more fearful of each other.

According to facebook signups there were over 2,700 people in attendance at these rallies across the nation with an additional nearly 5,300 people interested in them. Since the protesters to the rallies were not as organized we can only go by news reports in each city regarding the number that showed up.

The rally scheduled for Batesville, AR was cancelled per the Act for America website as soon as they found out that the organizer was with a white supremacist group, (see link). But the rally went on anyway, (it can be found on youtube). 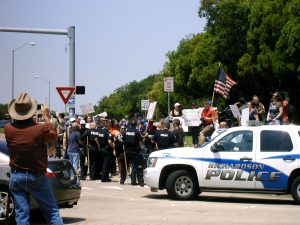 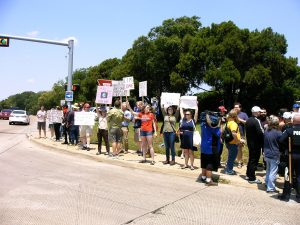 With the exception of two minor scuffles this rally was fairly peaceful compared to many others across the nation.

Tear gas was used in Seattle to disperse rowdy demonstrators and several people were arrested, some on suspicion of assault.

In St. Paul, MN state troopers arrested about a half-dozen people when scuffles broke out at the close of of the demonstrations at the state Capitol.

There were also numerous other reports across the nation of chaos and violence at these rallies.

At the rally in Richardson, TX many people on the anti-sharia side did not even know the organization that sponsored these rallies (Act for America) or who the founder and chairperson of the organization is, (Brigitte Gabriel). And while most were there to protest a concept of sharia law that American Muslims don’t want in America there were also people there to denigrate Islam, all Muslims, and the Prophet Muhammad, (pbuh). 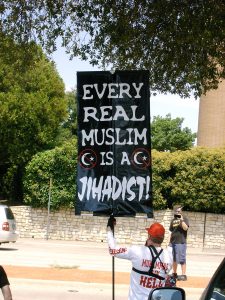 There can only be one logical reason why this rally took place across from a place of worship. And that is to scare and intimidate. Particularly when about one out of every five who attended the anti-sharia rally were either carrying long guns, dressed in military fatigues and some even wearing scarves over their face just like an ISIS fighter would. Unfortunately, I didn’t get the chance to ask the vital questions of: “Why do you feel you have to be armed across from a place of worship? Why do you have to conceal your face? What do you think would happen if a bunch of Muslims showed up across the street from a church armed, concealing their face and wearing fighting gear?” These are questions that I am going to explore as I get to know these groups that showed up at these rallies. One of which are the “Oath Keepers.” 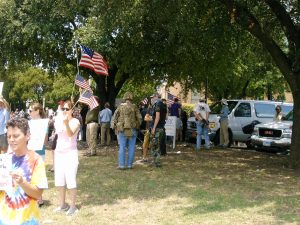 I would say about one-half of the people on each side were fairly reasonable and those individuals on both sides agree that it is simply a lack of proper communication and the fear of the other. Yet when I encouraged others to walk to the the other side with me, (whichever side that happened to be), people were very reluctant.

On the protest side I met a Muslim gentleman from Bangladesh, by the name of Quasi Sr Faruque. We sat and talked together for about 20 minutes. I asked him what brought him out to this rally. He said it was nothing more than to observe the freedoms Americans have in doing these types of things that could never be done in the country he is from. He went on to say that if him and I were caught talking together on the street where he is from like we were, we would both be hauled off beaten and lashed, or it would be done just right where we were.

Of course the Quran does not promote these things. There is a misconception of what sharia law is in this country among many people. It is slightly complicated because of old customs in certain cultures being carried over and referred to as sharia law in the middle east. Other types of sharia law that we hear about and abhor such as the stoning of an adulterous woman is nowhere to be found in the Quran, but laws like this in some middle eastern places continue today as men hold power over women.

So where do we go from here? The Center For Pluralism is planning on holding a symposium on sharia law in the near future. Check our website for updates. In the meantime I encourage people who haven’t been to a Mosque to visit one, ask the hard questions, study the Quran, the history and the culture. And if you have already visited, visit again and take some friends with you. We need to start planting seeds of friendship, cooperation and mutual respect.

Sam Madden is a volunteer representative and consultant for the Center For Pluralism. He can be reached at sam@centerforpluralism.com