It is not easy to say, Eid Mubarak – while witnessing senseless gun violence, and mindless killing of fellow Americans and fellow humans across the world. No one from an Atheist to a Zoroastrian is spared; many people live in apprehension in one place or the other. A lot of unresolved issues and unmet justices will continue to haunt us and tear us down. We have to fix them. 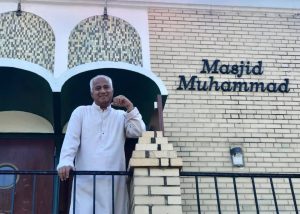 A few among us are gleeful that others are getting the raw treatment, and some are justifying it. It does not bode well on their part, and no one deserves to be persecuted, harassed, or lynched. It seems they don’t want the cycle of violence to end but perpetuate it as if they are drawing sadistic pleasure out of it. Forgive them, Lord, for they know not the joy of peace, indeed, blessed are the peacemakers.

My security and my peace of mind hinge on the safety of the people around me. If I frighten others, I am not at peace either and will remain tense. It behooves me to end the violence, not with force but with caring and assuring each other that we all have to live a dignified life.

This Eid, the Eid Al-Adha, is about sacrifice. Sacrifice is the willingness to give up what is essential for our survival. It is about parents going to sleep without food but feeding their kids; it is clothing their kids while waiting to get their own. In the case of extremities, we would instead get the bullet and save our loved ones, we are willing to rescue the child from a freezing lake risking our own life, and even strangers do that. That is a sacrifice: the willingness to value the lives of others over our own.

Today, the most cherished possession is money, and those people who are willing to give a portion of their funds for the well being of the less fortunate, that would be the best sacrifice one can make.

Please hold your funds, and we may need to help out the ones in dire needs, we may have an organization that will take up the cause to help the victims of rape, lynching, and dismantling the lives of the innocent people around the world.

Muslims around the world are going through the most challenging time in their history now. The plight of Rohingya and Uyghur Muslims is beyond control. If we don’t correct the course, the Indian Muslims (inclusive of Kashmiri Muslims) are the target of the next genocide.

What is happening in India now is terrible for India or the United States, both stand to lose out economically, socially, and politically. If we don’t bring this chaos under control, all the prosperity that has been achieved by individuals and business houses in India risks losing. The investments will trickle down, and the responsible corporations will start pulling out as they did in South Africa. Everyone fails in the end. The only people who will not lose are politicians. The criminals will be on special tribunals, and no one will go scot-free.

It is time to get a grip on the Indian situation. Modi can change the equation, but he has to earn the trust of a majority of Indians, Hindus, Christians, Sikhs, Dalits, Muslims, and others.

When Bin Laden’s criminals and others like them killed innocent people, they were called terrorists. Indeed, they were terrorists among us, but they were not Muslim in any sense of the word. Likewise, I urge you not to call Hindu Terrorism, or Hinduism incites violence. There is no such thing as Muslim terrorism or Hindu terrorism. Terrorists are among all of us. The Hindutva element among Hindus have lost their minds, like the ISIS among Muslims, we cannot perpetuate that. Now, India has a problem with Hindutva and not Hindus. Let that be clear. We cannot multiply ill-will.

I will be sharing some of the work we are doing in a few weeks, or you can attend the seminar on India’s future on 8/28 and catch up with it.

WHAT CAN WE DO?

We have to bust the myths. Most of the conflicts between communities are born out of tales, and not facts.

As responsible individuals, we must spark the desire in each other to live in peace, and for that, we have to come together in a safe environment and see eye to eye. And learn to enjoy each other’s presence and keep the conflicts out of conversations.

The Center for Pluralism offers workshops on the wisdom of religion, all the beautiful religions. The idea is to learn firsthand from the practitioners of the faith rather than from someone else. Each faith contributes to the well being of the world, and we have to learn to see it.

I guarantee you; you will seldom hear the truth about religion from others; everyone is hell-bent on decimating and denigrating other’s faith. So, whatever you hear about Hinduism, Islam, or Christianity from the others, please discard it. To get the full truth, you need to know to at least ten different practitioners of each faith. What is the need to know the whole truth? It relieves you from ill-will, hate, anger, and all those emotions that zap your peace.

To learn about Muslims, please consider reading the book American Muslim Agenda. It is about how to have a vision and bring about a positive change in societies.

We have a lot of reconciling to do. No one is born a rogue; they become one due to circumstances. It is in our interest to listen to each other’s concerns and figure out how to live cohesively. 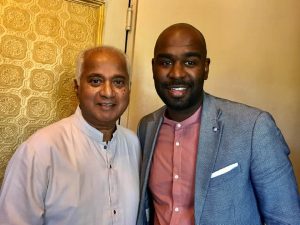 IMAM / KHATIB OF MASJID MUHAMMAD- Dr Muhammad Fraser Rahim. He surprised me by saying he read my writing “Difficult Eid Mubarak” this morning. He will observe a minute of silence for the victims of Dayton, El Paso and other shootings including the difficult times the world is facing. Particularly the difficult times Muslims of Uyghur, Rohingya, and Kashmir are facing now. Read my earlier posting about difficult Eid Mubarak on my Facebook.

Mike Ghouse is a speaker, thinker, activist, writer, and is committed to offering pluralistic solutions on issues of the day. He is the founder and president of the Center for Pluralism in Washington, DC. 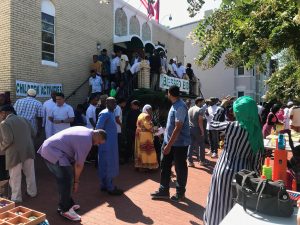 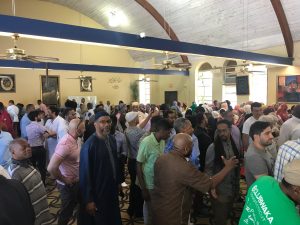 You can access the details for the upcoming festivals and events at:  www.PluralismNews.com or go to https://centerforpluralism.com/pluralism-news-festivals-and-events/

When Bin Laden’s criminals killed 2998 of our fellow citizens, when ISIS was massacring the Yazidis, Christians and Shias, when Taliban were beating up on women, when people bombed the Taj Hotel in Mumbai or blew up the shopping Mall in Kenya, and other outfits were terrorizing the innocent people, the people without common sense called it Muslim Terrorism. They were wrong, there were terrorists among us, but they were not Muslims in any sense of the word.

Likewise, I urge you not to call Hindu Terrorism or Hinduism incites violence. There is no such thing as Muslim terrorism or Hindu terrorism. Terrorists are among all of us. The Hindutva element among Hindus have lost their minds, like the ISIS among Muslims, we cannot perpetuate that. We can call terrorists among Hindus or Muslims.  It took me a lot of fights with Fox News, and Stuart Varney to change the narrative and started calling terrorists among us and even Sean Hannity knows the difference. They had a problem with extremists and not with Muslims. Now, India has a problem with Hindutva and not Hindus. Let that be clear. We cannot multiply ill-will.