Janmashtami is celebration of Sri Krishna’s birthday, the man who is the 8th Avatar (representation) of Vishnu; meaning the facet of creator that manages the preservation aspect of life. Hinduism sees God in three broad categories; Brahma, Vishnu and Shiva. Brahma reflects the creator form of God, and Vishnu represents the preserver aspect of creation that inspires one to be righteous, and Shiva brings a finite ending to life. It is a part of the life cycle; every human is born, lives on, and finally disintegrates. 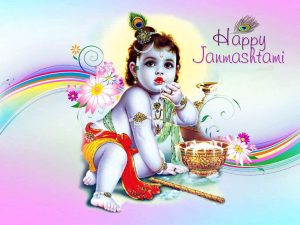 I visited his birth place in Mathura and that was awesome! I remember hunting for the eternal Rafi’s song ‘ Brindavan Ka Krishna Kanhaiyya”. I was so upset that the same song was sung by Sonu Nigam – and finally found the orginal by Rafi in a remote part of the town Mathura.

On my Radio show in Dallas way back in 2003 and 2004 – Swami Nityanand and I read the entire Bhagvad Gita for our audience in 100 episodes, the same was done for Isla and Christianity and did 50 hours for every religion from Atheism to Zoroastrianism and in between.

My parents told me that I was dressed up as Baby Krishna when I was a baby. I did not hunt for the pictures, that I should have, they were at Gopal Gowda’s home and Ramaswamy’s home, both were my father’s friends in the city council, and my father was the Vice-Mayor with Ramasawamy.

The true way to celebrate Lord Krishna’s birth celebrations (or appearance as the Hare Krishna folks call it) is to read at least a chapter from Bhagvad Gita. I am inspired by it, and I am a Muslim today because of reading a verse from Bhagvad Gita that called on each one of us – finding the truth is one’s own responsibility.

I am glad Huffington post has published this with Janamashtami songs and all…it has been my commitment to share the essence of festivals, so that we, the people of the United States may learn more about each other…. we have been doing this for 20 years.