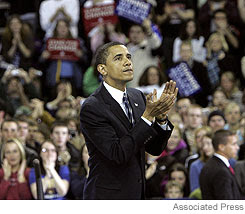 This is the first time in our nation’s history that some one is speaking the needs, wants and voices of a majority of the people. He is neither a right winger extremist, nor a leftist but a moderate right down the middle embracing and bringing every American together to participate and contribute towards the success, safety and security of America.

An overwhelming majority of us are moderates, people who want to get along with everyone and focus on living the American dream; education, employment, family, children, car, home and a secure retirement. Thank God for Obama, he mirrors the aspirations of millions of Americans and is our new shepherd on the political spectrum. He will lead us to a safe, secure, strong, and respectable and a healthy America.

Obama is for a strong America, where our economic and military strength is leveraged to persuade nations to follow the policy of live and let live and imbibe the democratic principles of honoring the voices and acknowledging the validity of every member of the society. It is in our interest to have peace around us, it is in our interest to create a just world, when others are at peace, and we reap the dividends as well. It is economical to pursue peace than bully around and frighten others. When others are frightened, our peace and safety is on the line as well.

Barak believes in talking with enemy, rather than frustrating the enemy to a point where we have to guard our selves every moment of the day and watch out for the destruction of our own peace, safety and security. Mother Teresa had once said “If you want to make peace, you don’t talk to your friends. You talk to your enemies.”

A healthy America is not a social medicine, as my fellow Republicans are brainwashed to believe. Our investment in the health of our people ensures that we have a reliable and productive work force, the healthier we are, the lesser the loss of time on job, more income produces more revenue. Where as an unhealthy America makes us lose on productivity and the costs that go with it. A healthy America is a productive America and it is in our national interest to preserve and strengthen it, this is the other side of coin of a strong America. It is not a charity; it is the best investment a nation can make in her people. The money we blew in Iraq could have done so much better for us at home.

Not all, but the core of the Republican Party is focused on manufacturing fear, building empires and relentlessly making enemies. We don’t need their nightmares. Neither of one of us in the world would live in peace with those attitudes. Their approach to Iraq has given birth to Al-Qaeda that was not there before and our presence in Iraq will produce more of them. It is time to respectfully give them their land and come back home with dignity and respect for the Iraqi’s to manage their own affairs. We are worse off today than we were in 2002. The few extremists in Republican Party frighten the public and then create false security, it is time for the majority of Republicans to speak up or lose in the elections. Barak has the inclination to remove the causes for such fears and his administration will restore our respect in the community of nations. That would be the best thing that can happen. It will make us morally strong again.

The Chinese philosopher Fo-Sho-Hing-Tsan-King meant to pass the following wisdom to our War mongers, “Conquer your foe by force, you increase his enmity; conquer by love, and you will reap no after-sorrow.” Until the hard core Republicans come down from their high horses and believe in humility, compassion, peace and respect for humanity, the Americans will keep them frustrated. The frighteners cannot be saviors.

A strong, safe, prosperous and healthy America should be our goal and Barak is the one who will deliver it.

Two part event: 1) Learn and share about Obama and 2) Make phone calls from your cell.

Write your comments to: CommentstoMike@Gmail.com
In the subject line please write :: Obama the Shepherd.
——————————————————————————–
Mike Ghouse is a Speaker, Thinker, Writer and a Moderator. He is a frequent guest on talk radio and local television network discussing Pluralism, politics, Islam, Religion, Terrorism, India and civic issues. His comments, news analysis, opinions and columns can be found on the Websites and Blogs listed at his personal website www.MikeGhouse.net. He can be reached at MikeGhouse@gmail.com or (214) 325-1916