(Note to my Jewish friends; what appears to be the hateful swastika symbol here is not that symbol, this symbol has been in use in India for over a millennium, it symbolizes four directions, four seasons of life )

Paryushan is an annual festival that Jains*** celebrate all around the Globe, it is either seven or nine days celebration depending on the sect; Swetambra or Digambra, they observe fasting for seven days or 9 days and conclude it on dus laxan. Throughout the days they observe the fast, they abstain from ill-will, ill-thought, and ill-actions, just as Muslims do for a month in Ramadan. It is a beautiful way of refreshing our souls on an annual basis.

The beauty and joy in forgiving and be forgiven are immeasurable.  It brings freedom,  Moksha, Mukti, Nirvana, Nijaat, salvation and true freedom to every soul. Indeed, the idea of forgiveness is central to every religion; that was Jesus’s focus, the dearest person to God is one who forgives, says Prophet Muhammad, and Lord Krishna reiterates that thought in Bhagavad Gita. If all the psychologists in the world were asked, what will bring the most freedom to the mankind, they may be tempted to say “Michami Dukkadam”. 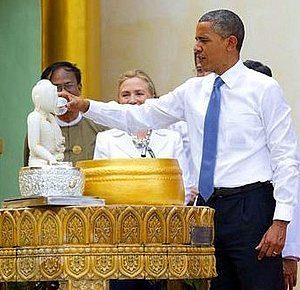 President Obama is perhaps the only president or head of the world who is a pluralist, he genuinely respects all faiths and traditions. He had no barriers between him and another human. I hope, someday, he will chair the Center for Pluralism.

“I forgive (without any reservation) all living beings (who may have caused me any pain and suffering either in this or previous lives), and I beg for the forgiveness from all living beings (no matter how small or big) to whom I may have, knowingly or unknowingly, caused pain and suffering (in thoughts, speech or action, in this or previous lives, or if I have asked, or encouraged someone else, to carry out such activities). (Let all creatures know that) I have a friendship with everybody and have no revenge (animosity or enmity) with anybody.

Indeed, that phrase resonates with me. I had talked about the meaning of Michami Dukadam in several congregations, including the one celebrating Najma’s eternal journey and again at the funeral prayer at the mosque in Richardson. It was a perfect Michami Dukadam between me and my late wife Najma. Thanks to the Jain tradition.

The Jains have been practicing this tradition for thousands of years and I join them in the Jain tradition of humility and forgiveness I say Michami Dukadam. I am pleased to share the perfect message from Dr. Vastupal Parikh.

I just wrote an article about Ramadan – which is similar in meaning at:
http://newsweek.washingtonpost.com/onfaith/guestvoices/2009/08/ramadans_spiritual_discipline.html

***** Jainism is a full-fledged religion like Hinduism and Buddhism and none is an offshoot of the other as it is often misunderstood. Jainism is a contemporary of Buddhism. Both the faiths are life centered where one’s deeds (Karma) determine his or her spiritual, physical and mental well being. Although Mahavira is referred to as God in common parlance, in the system, he is the 24th Tirthankara- the enlightened one, ( an equivalent of a messenger or a prophet in the Abrahamic traditions) who wrapped up the entire philosophy of the 23 earlier Tirthankaras. Jainism dates back to the Mohenjadaro civilization some 5000 years ago.

Mahatma Gandhi’s non-violence approach emanates from Jainism and the idea of the validity of multiple paths of the foundation for pluralism ( www.foundationforPluralism.com) has its origin in the idea of Anekant Vaad from Jainism.

When we live as neighbors, we might as well learn about each other. The best way to build cohesive societies is for its members to understand each other’s sorrows and joys, and festivities and commemorations. Wouldn’t it be nice if you know a little bit about your neighbor’s festival and perhaps invite them to your celebrations to start safe neighborhoods by understanding each other? Every human and every religious group celebrates something or the other in their way, each one is different, but the essence is the same; celebrations and or commemorations. A simple language is used for most people to get a gist of it.

“Festivals of the World” is an educational series by Mike Ghouse developed in 1993. When we live as neighbors and in the same communities, we might as well learn about each other. The best way to build cohesive societies is for members to participate in festivities as well as commemorations of each other, or at least understand each other’s joys and sorrows. Please note, the simplicity in writing is designed for people of other faiths to learn and to know, so we can function cohesively.

Dr. Mike Ghouse is the Executive Director of the Center for Pluralism in Washington, DC. He is committed to building cohesive societies and offers pluralistic solutions on issues of the day. More about him at https://www.linkedin.com/in/mikeghouse/