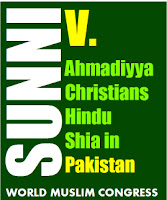 Condemning the silence of Muslim Majority in Pakistan

f you ever feel that the “other minority” community deserves to be persecuted, or “they asked for it” then you have a problem! You need help, please ask God to drain the solid waste from your system, it is dangerous for you, and you are your own enemy with that load of crap in you. Continued: http://worldmuslimcongress.blogspot.com/2013/01/condemning-silence-of-muslims-in.html

The majoritarian attitudes are the root cause of much of the evil in the world; Pakistan is no exception, indeed, the problem is exemplified with the silence by the government of Pakistan, I cannot believe a Government cannot reign in on extremists and bring law and order to the nation.

First they came for Ahmadiyya,
I remained silent because I am not an Ahmadi;

then they came after Hindu women,
it did not matter to me, I am neither a Hindu nor a woman;

They did not spare the Christians,
they lied and framed the blasphemy charges,

they turned towards the Shia,
singling out and murdering them in the public;

the evil men are coming after me, a mini-Sunni*
where the hell are my fellow Muslims?

The only way things will change is if all of us, each one of us, speaks up against injustice and killing of fellow beings, no matter who it is.

The least you can do is condemn all such acts in your daily conversations, nothing more. Where ever you get a chance express yourselves, there is an energy that builds from there….

On the other hand, if you feel that the “other” community deserves to be persecuted, or “they asked for it” then you have a problem! You need help, please ask God to drain the sewer from your heart, it is dangerous for you, and you are your own enemy with that load of crap in you.

As a Sunni Muslim, I am embarrassed at these evil men, not only for harming fellow beings but also for maligning a religion that we consider to be a Rahmat (mercy) to mankind, these men are making liars out of us. I condemn the silence of the Majority in Pakistan. I hope every one of you feels the energy to condemn this in your daily conversations and pray for peace and sanity, in the tradition of Prophet Muhammad (pbuh). Thank you.

Muslims Together dreaming of building a cohesive world.

* Mini-Sunni to denote the factions within Sunni who declare each other in less than kind words. Shame on all of them!