This is our work; opening people’s hearts and minds towards each other, so we all can live securely with our faith, freedom, ethnicity, race and whatever uniqueness we have. The more we learn about each other, the fewer the conflicts would be. Our work involves Pluralism in religion, politics, society, culture and workplace and religious freedom and human rights across the world.

All of these at https://centerforpluralism.com/pluralism-news-september-14-2018/
Please note – the same articles can be accessed by logging in to www.PluralismNews.com

“These guys are frightening some of the innocent and ignorant Hindus to believe that “Hinduism is in danger” and posing themselves as the freaking saviors. Hinduism does not need these men to save it. It is a 5000-year-old robust religion and will always be there like all other religions.” More at https://www.theindianpanorama.news/other-stories/fake-saviors-of-hinduism-at-the-world-hindu-congress-in-chicago/

This is from a Pew Survey showing % of each demographic that has a college degree. 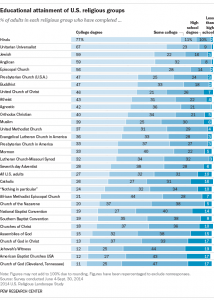 Muharram is the first month of the Muslim calendar and starts on September 11, 2018. This is the 1440th year of Prophet Muhammad’s migration to Medinah. A few Muslims celebrate this as a new year, while a majority commemorate, a time to reflect where we stand morally and also reflect on the sacrifice of Imam Hussain this month.  More at https://www.huffingtonpost.com/mike-ghouse/muharram-2011-centrality-imam-hussain_b_1117929.html

This 5778th year of Jewish Calendar begins on September 11, 2018.
Rosh Hashanah commemorates the creation of the world and marks the beginning of the Days of Awe, a 10-day period of introspection and repentance that culminates in the Yom Kippur holiday, also known as the Day of Atonement. Rosh Hashanah and Yom Kippur are the two “High Holy Days” in the Jewish religion. More at https://centerforpluralism.com/the-spirit-of-rosh-hashanah/

Among Hindus, there is a beautiful tradition of invoking that aspect of God which removes barriers and paves the way for a smoother life. The icon that represents this aspect of God is known as Ganesh, Ganesha, or Vinayak depending on the region, most Hindus around the world invoke Ganesh before they start anything in life from starting their day, to opening a new business or wearing new clothes or starting a social ceremony. More at https://centerforpluralism.com/spirit-of-ganesh-chaturthi/
======================

The Center for pluralism welcomes the induction of Anshdeep Singh Bhatia, the first turbaned Sikh to be included in the US President Donald Trump’ security team. Pluralism is inclusion and respecting the otherness of the other; we are on the right track with occasional detours. More at https://centerforpluralism.com/congratulations-to-anshdeep-singh-bhatia-the-first-sikh-in-trump-security/
======================

Paryushan is an annual festival that Jains celebrate all around the Globe, it is either seven or nine days celebration depending on the sect; Swetambra or Digambra, they observe fasting for seven days or 9 days and conclude it on Dus laxan. Throughout the days they observe the fast, they abstain from ill-will, ill-thought, and ill-actions, just as Muslims do for a month in Ramadan. It is a beautiful way of refreshing our souls on an annual basis.  More at https://centerforpluralism.com/paryushan-a-jain-festival-of-forgiveness/

Over 100 civic, business, religious and community leaders from Dallas/ Fort Worth on my Radio show that day- Here is the live video – https://www.facebook.com/Dr.MikeGhouse/videos/10160928389970249/?t=6
Dallas, Texas. About 10:00 in the Morning of Tuesday, September 11, 2001, I was called in by AM Radio 1150 to address the situation; and 950 AM also joined in to simulcast the program. The great tragedy had left everyone speechless and had frozen everyone from doing anything. I was shaking but was committed to make sense out of the chaos and bring coherence to the day, and pave the way for relevant actions, among them are – donating blood, holding interfaith prayers and donating funds to the victim’s relief.
9/11 is one of the most significant days of my life, and I have made a lifetime commitment to dedicate this day, every year to serve my nation by bringing Americans together for the safety and security, and peace and prosperity of America.
As a Muslim, I am deeply committed to America, the land of the brave and the free with liberty and justice for all.

Unity Day USA is about re-affirming our faith in the goodness in humanity, and the longing for harmony and co-existence. The rituals include but are not limited to Native American, Atheist, Baha’i, Buddhist, Christian, Earth-traditions, Hindu, Muslim, Jain, Jewish, Sikh, Wicca and Zoroastrians; thus it is an all-inclusive event.

As Americans, we uphold, protect, defend and celebrate the values enshrined in our constitution. Our faiths reinforce the idea of one nation with liberty and justice for all.

I am pleased to share a lengthy but meaningful video by Josef Avatar, President of the non-profit organization “Israel Palestine Confederation” of which I am one of the Board Members.

The peace process is not an easy one – in the last 25 some years that I have been actively involved in the community building, I have found extremists on both sides of the issue and along moderates among us, not in Israel or Palestine, but right here in America.
Reuven Rivlin, the President of Israel, likes the ides of the Israel Palestine Confederation and has talked about it in several of his speeches.
Full Story and Video at – http://israel-palestine-dialogue.blogspot.com/2018/09/israel-palestine-mutual-democracy-video.html
======================

Mistakes Muslims have made

I will finish writing the book this weekend, thanks to Hurrican Florence for keeping me in. The book lays out the mistakes Muslims have made and how to fix them.

Busting Myth about Hinduism and Islam

We are a non-profit 501 (c) (3)organization.
Please donate at https://centerforpluralism.com/donate/

We are also known as Americans Together and Foundation for Pluralism.

With your donation and paid staff, we can so contribute much more work to create safe societies.

https://centerforpluralism.com/what-do-we-do-at-center-for-pluralism/ ;
Mike Ghouse
(214) 325-1916 | [email protected]
www.CenterforPluralism.comDr. Mike Ghouse is a speaker on Pluralism and is the founder president of the Center for Pluralism in Washington, DC. He is committed to building cohesive societies and offers pluralistic solutions on issues of the day.  https://www.linkedin.com/in/mikeghouse/