The Center for pluralism welcomes the induction of Anshdeep Singh Bhatia, the first turbaned Sikh to be included in the US President Donald Trump’ security team. Pluralism is inclusion and respecting the otherness of the other; we are on the right track with occasional detours. 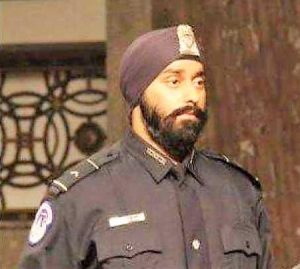 God bless America, God bless our courts, and our Department of Justice for standing and upholding our immortal declaration in 1776. “All men are created equal. They are endowed by their Creator with certain inalienable rights, among these are Life, Liberty, and the pursuit of Happiness”.

Report from Siasat.com as follows;

Ludhiana-born Anshdeep Singh Bhatia has become the first Sikh to have been inducted into the security detail of US President Donald Trump.

Anshdeep was inducted last week after he completed his grueling training in the United States.
His family moved to Ludhiana from Kanpur during the 1984 anti-Sikh riots. He lost his uncle and a close relative after the frenzied mob stormed their house in Kanpur’s KDA Colony in Barra. His aunt’s marriage was scheduled in second of week of November and the family was busy making an arrangement.

Anshdeep’s father Devendra Singh was also injured in the attack and had received three bullet wounds.
His grandfather Amreek Singh Bhatia, a manager with Punjab and Sind Bank, opted for a transfer to Ludhiana. His father, who was into the pharmaceutical business in Kanpur, married in Ludhiana and moved to the United States with his family in 2000. Anshdeep was 10 at that time.
Anshdeep who dreamt of making to the President’s security one day stumbled upon a block when he was told he would have to change his looks. But Anshdeep moved the court against the riders and the decision came out in his favor. “