– I would have used the word Unique Festivals, strange connotates that they do not conform to us, who are we? Is one group of people more privileged than the other?

Festival is an expression of joy, which multiplies when different people come together, as long as no one is hurt, that is a good festival to the observers. Guardian used the word “Strange” Festivals, which connotates abnormal.  I disagree. They are unique. 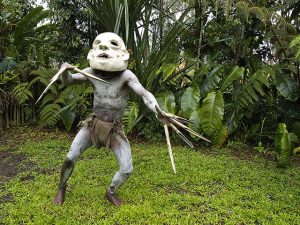 For centuries, the peoples of the highlands of Papa New Guinea have fought over land, women, and pigs. Sorcery and Bigmanship are some of the weapons used to fight and ward off invaders – clans would paint their bodies with clay and create fearsome masks as part of their psychological warfare against the invasion of their territory by other clans. This is a mudman from a village in the Wahgi Valley, near the town of Mount Hagen.Photograph: Jeremy Hunter 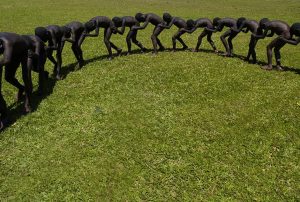 Sing-sings in Papua New Guinea form an important part of cultural life as they represent an opportunity for the clans to express their tribal solidarity. I saw the black snake dance performed by the Apenda clan when they attended a sing-sing in Leh, near Morobe. Photograph: Jeremy Hunter 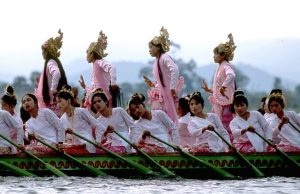 Between September and November, the 18-day Burmese festival Phaung Daw U at Lake Inle allows the indigenous Intha, “the sons of the lake”, to venerate five images of the Buddha dating from the 12th century. Four of these are transported around the lake to a different monastery each day by an enormous golden Karaweik (barge). The vast aquatic procession is preceded by a boat of Kachathe dancers whose balletic movements mimic the grace and fluidity of the grasses waving gently on the banks of the lake. Photograph: Jeremy Hunter 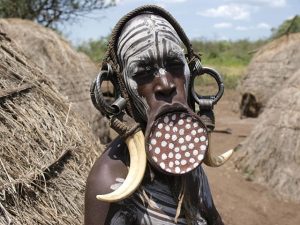 The Mursi – a tribe without chiefs or leaders – occupy land in southern Ethiopia between the Omo river and its tributary the Mago. The distinctive trait of the Mursi is the labial plate worn by the women. Anthropological studies suggest that the plates are an expression of social status. The plates are removed to eat and drink but never when Mursi men are close by. This woman’s plate, fired from clay, is 14 cm in diameter – the size of a large saucer. Photograph: Jeremy Hunter 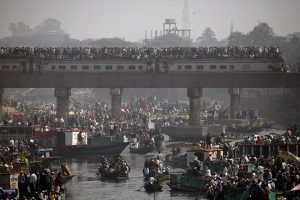 The hajj to Mecca, in Saudi Arabia, is a journey that every adult Muslim should undertake at least once in their lives. But for millions of Bangladeshi, the cost is simply prohibitive so Biswa Ijtema is an alternative. I went to the River Turag at Tongi, on the outskirts of the capital, Dhaka, to witness this gathering last year, on 24 January. An estimated five million pilgrims journeyed there – for just 22 minutes of devotion. To witness the power of mass devotion on such a scale was truly humbling. Photograph: Jeremy Hunter 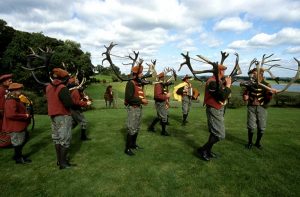 The Horn Dance is an ancient fertility celebration whose festival date is determined by a quirky formula: it is always celebrated on the Monday following the first Sunday after 4 September. The English folk dance is believed to be part of a pagan hunting ritual with origins that can be traced back to Saxon times; it was first performed at the Berthelmy Fair near Burton-on-Trent in 1226. The dancers carry around the lanes of rural Staffordshire six pairs of enormous reindeer horns, which have been carbon dated to 1065. Photograph: Jeremy Hunter 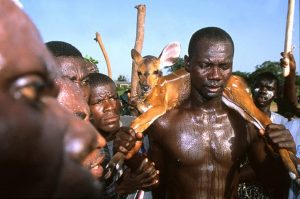 This is the Aboakyer deer-hunting festival in the town of Winneba, Ghana, in honor of the fetish war-god Apa Sekum. The close relationship between hunting and the sacred is found in traditional religious rituals and festivals the world over. It is the importance of food and security which comes from it that is at the heart of this festival. Photograph: Jeremy Hunter 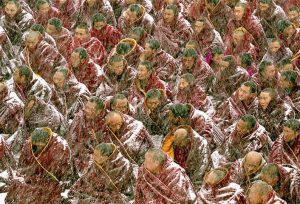 In the monastic town of Labrang, in the autonomous region of East Tibet, life and local customs can still be witnessed as they were some 500 years ago. During the Great Monlam festival, which heralds the start of the Tibetan New Year, the entire monkhood assembles in front of the Living Buddha, who is presented with hundreds of spiritual messages. The reading of these takes several hours, during which the monks must remain to squat motionless on the ground, regardless of the freezing conditions. On this day of blizzards, the temperature plummeted to -27C. Photograph: Jeremy Hunter 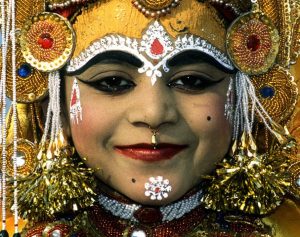 In 2001, up to 70 million pilgrims are estimated to have attended the 42 days of religious pilgrimage intertwined with carnival that is the Maha Kumbh Mela, in Prayag, in the Indian state Uttar Pradesh, making it the largest gathering anywhere in world history. During the festival, young boys, attired in lavish ceremonial costumes, take on a temporary gender change during the period of the Kumbh, and are worshipped as living female Goddesses. Their feet are not allowed to touch the ground and they are carried everywhere by their fathers or guardians. The next Maha Kumbh Mela will take place in 2013. Photograph: Jeremy Hunter 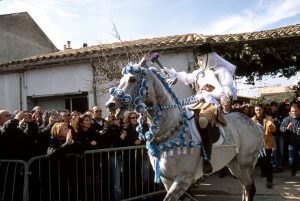 In Oristano, Sardinia, Paganism and Catholicism have developed side by side. Every February, the finest horseman of the region is elected Componidori for La Sartiglia festival. For one day, he is no longer a man; he becomes an androgynous masked god-horseman. His equestrian skills are put to the ultimate test and if, during the course of the day, the god-horseman falls from his horse, the fortune of the entire region will be in jeopardy for the coming 12 months. Photograph: Jeremy Hunter 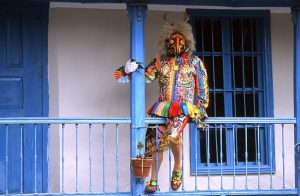 In Peru, La Virgen del Carmen is known as the Earth Mother, and every July in Paucartambo, a remote town at an altitude of almost 3,000 metres on the lower slopes of the Andes, the townsfolk celebrate her life with a huge fiesta that has been taking place since the 17th century. Throughout the three-day festival, the image of the virgen is paraded through the streets while bizarre Pagan animals (like this Saqra – a kind of Andean devil) attempt to attract her attention. Photograph: Jeremy Hunter 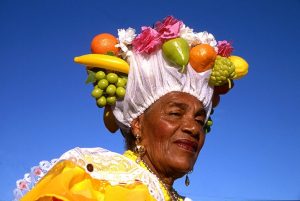 Despite the religious origins of Mardi Gras, the enduring image of the festival is of dancing, naked flesh and outrageous costumes and head-dresses. This was taken in Cayenne, capital of French Guiana. Photograph: Jeremy Hunter\