The “Interfaith Prayers” became commonplace after the 9/11 event. However, the interfaith prayers have been around in Dallas, Texas since 1964 through the Thanksgiving Square, and in Washington DC since 1978 through the InterFaith Conference of Metropolitan Washington.

On the day of 9/11/2001, I was live on Radio for 7 hours and over 100 live calls were initiated that day from area Mayors, religious, civic, community leaders and FBI, police and the firemen. I was trying to bring coherence to a chaotic day and achieved three goals from the Radio show; initiated interfaith prayers, blood donations, and fundraising for the victims. Indeed, almost all the religious groups were on the Radio and held the interfaith prayers within a week of the event.

Joel Brooks was the Executive Director of American Jewish Congress, he and I teamed up and visited every place of worship with others who were on and off.

During that process, there were places where they could not get people of different faiths to share their prayers, especially Jewish if it were a Saturday. That vacuum, made me search for prayers in different religions and start sharing them. A few questioned me if I can represent other faiths, but to me, our belief is common with different rituals.

Prayers are sincere wishes of humans requesting the creators’ blessings. There is not a prayer in any religion or tradition, that does not wish well to others. If you translate prayers of all faiths into easy English – you will find them all have a similar theme; well being of fellow humans. A few of our religious clergies have reduced the prayers to exclusive by customizing them; otherwise, prayers are universal.

India Association in Dallas held a prayer vigil on a Saturday, I was asked to invite Jewish friends, I could not get anyone. That is when I found a Jewish prayer that was so similar to Islamic prayer. I passed it by Harriett Gross, an editor with Texas Jewish Post and she was fine with it.
I had forgotten all about that, until today, when Zarar Albadri, my friend shared his friend Shenaz Uppal’s posting. Thanks to both of them.

I just want to clarify this – I have recited the Jain and Hindu prayers on the top of the Chichen Itza temple, and in the cenotes (underground wells) since there was no Hindu or Jain there, along with Jewish and Muslim prayers. I have shared the Sikh prayers and Buddhist prayers as well.

BE SHEM ELAH HA RAHAMIM
In the name of God, the Most Gracious (Ezr.5:1; Dan.9:9)
ELOHEINU RIBOHN HA-OLAMIM
All praise be to God, Lord of the universe (Jewish liturgy)
HA RAHAMIM
The Most Gracious (Dan.9:9)
MELEK YOM HA DIN
Master of the Day of Judgment (Jewish terminology)
ELEKHA ADONAY EQARA WE EL ADONAY ET HANAN
To you, O Lord, I implore; and to my Lord, I seek help (Psalm 30:9)
HEHENI BE ORACH MISHOR
Guide us to the straight path (Psalm 27:11)
ALEKHET BE DEREHU WE LEYAREH ITTO
The way of life according to His path by reverencing Him (Deut 8:6)
LE HALAK BE ETSAH RISHAH WE LA SAGHAH
Not by the advice of the cursed, nor of the strayers (Psalm 119:21)
PEACE, UNITY, AND SERENITY TO ALL MANKIND 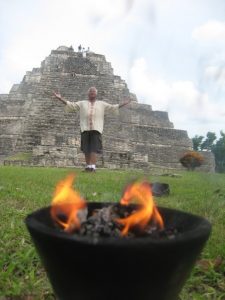 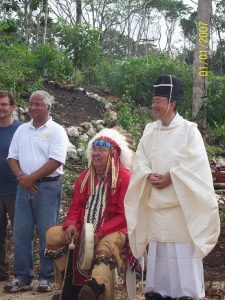 A few of the many of my all-inclusive interfaith greetings and prayers are listed on youtube:

Dr. Mike Ghouse is a public speaker and the Executive Director of the Center for Pluralism in Washington, DC. He is committed to building cohesive societies and offers pluralistic solutions on issues of the day. More about him at https://www.linkedin.com/in/mikeghouse/