April 2, 2018, Washington, DC – A handful of misguided individuals are expressing their hate for Muslims by organizing a day with multiple names like Punish a Muslim, Hate a Muslim, Hurt a Muslim. They said, wherever you see a Muslim, be it a child, senior citizen or a woman, hurt them including ripping the head scarf off a woman. That is their plan for Tuesday, April 3, 2018.

This event creates fear among fellow citizens; women must be scared to go to work or shopping. It will take away police from attending to criminals and maintaining law and order. It is not in the interests of anyone.

It was started by a few miscreants in London, United Kingdom and has made its way into America. I urge you, the reader of this press release to refrain from calling them “British” “Racist” or “White Radicals.” That would be thoughtless and boomerangs back on to Muslims.

Muslims don’t like to be called terrorists, though there are terrorists who claim to be Muslims. I urge Muslims to resist the temptation to call Christian Terrorists or White Racists because both are false statements. Every religious, social, ethnic and national group has their share of extremists among them.

At the Center for Pluralism we believe, the more the people come together on social, political, religious, cultural and business events, the fewer the conflicts would be. It behooves for Muslims to take the lead and get out of their homes and Mosques and be with the people in different settings. We have to create a cohesive world where none of us has to live in fear of the other.

Numerous surveys have repeatedly pointed out that, those who have ill-will towards Muslims, have never met a Muslim before. The imagery they have of Muslims is fed by Media who wants to pit one American against the other for their gain. American Muslims are indeed, kinder, gentler, polite and caring humans, who would they others know about it unless they meet you?

I urge my fellow humans across the world, to talk to a Muslim or whoever they hate and learn about them. Hating others will do a lot of unsettling to the hater, but very little to the hated. There is no need to hate anyone or love anyone either. Live your life and let others live theirs. Forgive them, lord, for they know not!

On my part, I want to hear any criticism you have of Islam, Quran, Prophet Muhammad or Muslims. Together we can find the answer where all of us live with our differences and live without fear of each other.

The following video has examples of Jesus Christ and Prophet Muhammad and offers pluralistic solutions. https://www.facebook.com/MikeGhouse/videos/1866050610081467/?t=1

I urge Muslims to learn about Free Speech; it is a God-given right to every human born. Let people freely express their anger, hatred, love, and compassion. I will be happy to give a talk on free speech at your mosque or a gathering with examples from Quran and practices of Prophet Muhammad (PBUH).  Watch this clip about free speech https://www.youtube.com/watch?v=9vQs1IcSdYA

The Center for Pluralism is committed to building a cohesive America where every American feels included. If we can learn to respect the otherness of other and accept the God-given uniqueness of each one of us then conflicts fade and solutions emerge. Our vision is to see each one of us live securely in the pursuit of life, liberty, and happiness. 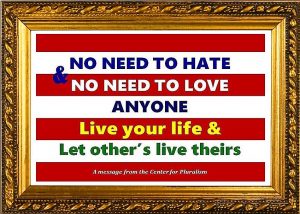