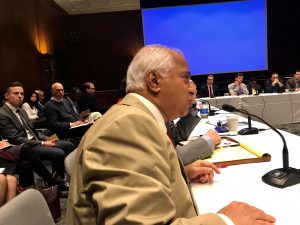 We need a drastic change in our policies; if we keep absorbing refugees elsewhere in different lands as they are forced out of their homes, we are essentially legitimizing the oppressors to throw anyone out without consequences.

What we need to do is create safe zones for the affected people and then work with the affected parties to restore sanity and harmony and build cohesive societies. It is not only cost-effective and preserves the social equilibrium of each nation but upholds the most cherished values of humanity, their dignity.

NGO Ask: We ask all the NGO’s to consider helping with this solution.

We ask the United States Government to seriously consider upholding the dignity of the individuals by preventing tyrants from expelling the weak. We have to stop the trends set in the past to absorb the refugees and legitimize the discharges. Those who are out, we must incorporate, but at-once prevent anyone from being expelled from their lands. We have to work with the United Nations in creating safe zones for the victims to feel safe, while negotiations to reconcile between the conflicting parties must continue.

We hope to take this forward to bring about a positive change in the world.

God willing, we will be working with Republican and Democratic congressmen to introduce the bill. It will be a bi-partisan bill.