This day two millennia or so ago in Jerusalem, Jesus of Nazareth collected his 12 followers for dinner in an upstairs room.  As they came, he washed their feet, much to their surprise for he was their teacher, their Guru. And it was a feudal society. The next day, he was to be executed by the Roman overlord in a mock trial and with false evidence at the behest of the local Jewish clergy and nobility who saw him a threat to the old order.  As the group of disciples sat, he told them that one among them would betray him.  Love each other as I have loved you, he gave as his final teaching before he broke bread in what was made famous by painters as The Last Supper.  There was also laid the foundation of the Holy Eucharistic Mass celebrated every day in every Catholic Church in the world 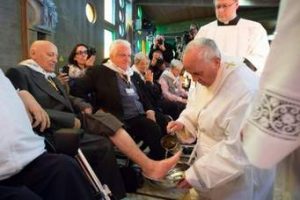 Pope Francis washing feet is a symbol of humility

On Maundy Thursday one year, Father Ambrose invited me to a Mass at the institute.  At the appointed place in the hour-long ritual, he as presiding priest called me and eleven other men and women to the Altar platform, bade us sit on chairs, called for a basin and jug of water.  With an apron covering his white cassock, he bent low, took my feet, poured water over them, washed them clean and then dried them with his apron towel.   He did this for all twelve us. The twelve had misty eyes as they walked down the aisle to their seats as Ambrose proceeded with the Mass.