CONGRATULATIONS TO THE VISIONARY LEADERSHIP OF MUSLIM CAUCUS

Ghazala, Zarina, and the respected board members, thanks for inviting me, and I’m glad to have participated, and wholeheartedly admire the inclusive vision of your leadership. As Muslims learn about your work, they’ll join you en masse. There is a whole lot of good this group has generated.

Please send a few pictures, and I will send for publication. You are welcome to add an item or two in the piece below as your quote. A few pictures and video links are given below in this short report.
# # #

The Muslim Caucus – a hope for American Muslims.

Every good thing starts with the dream of a single person when people see its viability they will join.

Kudos to Ghazala Salam, Zarina Baber and the board members of the Muslim Caucus. The first annual Muslim collective was a successful conference. “Organizing to Win is a leadership, organizing and action training to mobilize Muslim Voters.” I believe it was the dream of Ghazala, and the vision of her board members, and you may see it as your own dream coming true. It was certainly my dream. https://www.muslimcaucuscollective.org/

Thanks to organizations like ISNA, CAIR, MPAC, Muslim Advocates, and several others who have met the foundational needs of the Muslim community as they were establishing themselves in America. Now it’s the Muslim Caucus turn to channel the political aspirations of fellow Muslims.  The Center for Pluralism will continue to work on advancing Pluralism, religious freedom, and building a cohesive America.

The conference highlighted some of the Muslim contributions to America, one among them was the 63 free Muslim medical clinics that serve fellow Americans who do not have insurance. This is a powerful expression of Muslim service to fellow humans.

Indeed, it was communicated nationally in live interviews with Senator Warren, Mayor Blasio, and Governor Inslee. There are so many good stories of real people benefiting from the service that it is worth sharing.  In a program with the Muslim Community Center of Dallas, one such powerful story was narrated of a white woman who silenced the attacks on Islam in a gathering I was speaking. She said that the Muslim doctors had saved her life through the free Muslim clinic in Dallas. Indeed, it was a compelling record to combat Islamophobia.

The elected representatives who attended the event were inspirational.  Congresswoman Ilhan Omar (despite her frustrated response), Delegate Sam Rasool, Councilman Johnson, Governor Candidate Dr. Abdul El Sayeed, and others gave reassuring talks. They are the role models for Muslims to emulate. I am merely writing what I observed, there was a lot more to the conference than I saw.  All the panels, programs, and speakers were refreshing.

Our short term and continuing goal ought to be medical service and regular medical camps in rural America and poor neighborhoods. Serving fellow humans is one of the 12 strong Muslim Values enunciated in the new book American Muslim Agenda. If an aspiring candidate is identified with public service, he or she will have an edge in the race. I believe Sam Rasool made that point very well.

Muslim are talking about serving nutritional food for the homeless and hungry, particularly our veterans. Dr. Humair Ali is working on it for several years.

These services help fellow Americans see our commitment to the wellbeing of America, and thus become one with all. It is our home, and we have to contribute to her well being in every which way possible, including serving all Americans.

When my late wife Najma ran for the Carrollton city council in 2006, we knocked on hundreds of doors to seek their support. However, she lost by 81 votes. That effort prompted me to put a plan together to identify ten Hijab-wearing Muslim women in ten major cities and train them to run for the city council.  It will be a positive expression of Muslim commitment to America.

The conference was uplifting to see so many youths running for the offices in different areas. It was good to see a shared dream of Muslims start emerging at the conference.

One of the many meaningful moments in the conference was when a question about LGBTQ was thrown at the panelists. Most Muslims take a hike as they find it painful to reconcile the reality of life and choose to stay in the silos or stick to the limited understanding of haram (sin). I was one of the first Muslims to speak in college campuses and churches about accepting the uniqueness of all humans, and invariably insults were hurled at me for taking that stand, but it sent them scrambling when Congressman Keith Ellison supported the rights of LGBTQ, what can they say? A few years later ISNA also acknowledged it.  No one wants to educate in public about the acceptance, as a result, as recently as 2016 Elections, a few Muslim leaders from the Mosques were scheming how to dodge that question instead of learning and speaking the truth.

When the community is lost, a leader always emerges from among them to restore the balance of society. As our youth participate and run for public office,  they need a clear direction. The good news is our Youth are not as racist as the men and women above 50, however, they need a clear direction. I was glad to see Khizr Khan’s response, “Rab has created the whole Aalameen, and I accept his wisdom, then he added that the Prophet was a Rahmat to the universe. Sam Rasool beefed it up by saying when I take the oath of the office to uphold and treat every American as equal, that is what I do.  Muslims who are biased, need help in clearly seeing the wisdom of the Universal God.  God’s word should not be reduced to the old meaning interpreted by Muslims of that time, but God’s wisdom works all times. Glad to see the clarity of the message at the Muslim Caucus. We must become Mukhlooqul Aalameen in the footsteps of Allah and Muhammad who are for the Aalameen.

Yet, another momentous sentence was uttered by Dr. Al Seyed. When he ran for the Governor of Michigan, at the initial stages, a typical uncle advised him not to, as white people will not vote for him. How wrong the uncle was, he did not understand America. Al Seyed believed in the American values and the American people and continued with his campaign. As he started getting the endorsements, the uncle meets him again and says, he was glad white people endorsed and now he is ready to support him.  At that moment Al Seyed said something powerful, which is worth repeating. Why do we need validation from others? Indeed, why do we need validation? If a candidate stands for the common good of all Americans, he or she is qualified and deserves our support, regardless of other’s endorsements.

In the book, there is a section on the attitudes of Muslim leaders, who follow the idiom: Monkey sees monkey do. They will do things or go to the meetings only if someone else is going. Leaders don’t need approval, they see the issues and articulate to the un-willing and bring them on board and lead them.

The latest book on the market is the American Muslim Agenda. It’s a road map and a blueprint for Muslims to create a cohesive America, where each one of the 327 million of us feels secure about our ethnicity, culture, race, and religion. What else do we want?   The book also presents for the first time in Islamic history, twelve values of Islam, fully backed by verses from the Quran.  The concluding chapter articulates the goal of electing a Muslim woman president in the year 2036 and lists the things we have to do in the next 17 years to choose the first Muslim woman president of the United States of Ameria. Since I wrote that, Why Muslim woman? Please read the book.

Lastly, I commend Ghazala and Zarina for inviting the Republicans to the event, we need to continue to do that. Inclusion is a sincere act and not a whitewash talk. If you ask or demand others to be inclusive, you’ve to demonstrate that you have taken that first sincere step towards it.

Not all, but several Muslims are opposed to reaching out to the “right-wing” TV and radio hosts and media personalities.  We call those folks (right-wingers) names for refusing to talk with the affected ones, but we do the same as they do; don’t want to talk to people who differ with us, If we don’t, then who will?   If we don’t speak with them, we crookedly wish them to remain who they are. I have many successful examples to share, most of them are shared in the book. Study the Seerah of Prophet Muhammad by Karen Armstrong, and not by Ibn-Hisham which is flawed and the fiction of a right-wing Muslim (the book lists why the Seerah is faulty in the chapter source of extremism in Islam).

The Prophet is our example, Islams’ vision of Aalameen, that is universalism and it may take another generation to grasp and act on it.  We should learn to be confident Muslims to allow the diversity of thoughts among us and with others. Freewill is first right given by God to all humans, right from Adam down to us and forever till the Day of Judgment. We have a long way to go and go, we will.

I appreciate the work of Muslim caucus, and may God help us be more open and more inclusive before we ask others to be.

The video links and pictures will be updated here at this link when available.

A few pictures – links will be provided to all pictures later 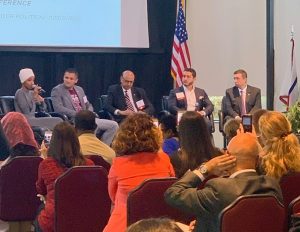 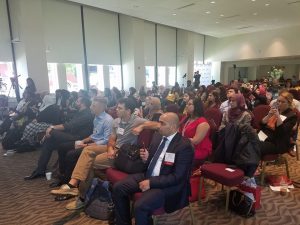 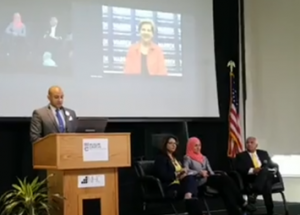 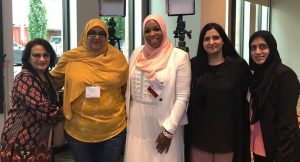 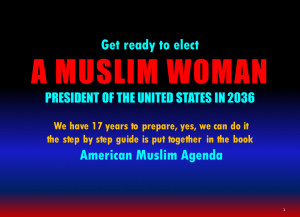 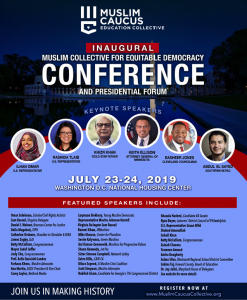 Dr. Mike Ghouse is a public speaker, thinker, author, and an interfaith wedding officiant. He is committed to building cohesive societies and offers pluralistic solutions on issues of the day. His book, the “American Muslim Agenda” is about Muslim earning their own space in the community be it social, religious, cultural or political. Mike’s mission is to open people’s hearts, minds, and souls towards each other. He believes that the ultimate purpose of humans is to live freely and be comfortable with their culture, race, religion, ethnicity, sexuality, politicality, and individuality. He is president of the Center for Pluralism committed to pragmatic education and practices to restore America to its pluralistic values.  More about him at https://www.linkedin.com/in/mikeghouse/