A letter signed by various NGO’s was presented to Hon. Sam Brownback, Ambassador at Large for Religious freedom around the world. It will be presented to the President, Secretary of State, Defence, and Attorney General as well https://docs.google.com/document/d/1K6590nqx_Vi5DIb-sCzytrdMILMzlToun_EBWZk0B5k/edit 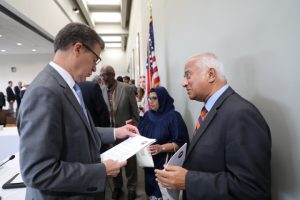 We urge you to ask the Honorable Prime Minister of India, Mr. Narendra Modi, to lift the six-week-long severe restrictions on the ordinary lives of the 7 million citizens of Kashmir, restore their freedom, and ensure the rule of law is in place. Here are a few points to consider;

Your message will carry enormous weight with the Government of India, and an additional dispatch from the Department of State as well as Ambassador Brownback to this effect will keep our allies — India and Pakistan — from moving towards disaster.

Your timely statement will do miracles. The world would appreciate you and your administration for stopping a possible genocide of Uyghurs, Kashmiris, and Indians if you can act in time.

Ambassador Brownback has reiterated that if people are free from fear, they can focus on nation-building, and everyone will prosper. Religious freedom in the United States is a compelling reason for our prosperity; the world can learn from our experience.

Your message will help promote and restore India’s democracy and freedoms.