The words Hindu Terrorism and Hindu Terrorists are offensive to Hindus, rightfully so, and it is offensive to this Muslim as well. Hindutva and Islamists are the political movements from within Hinduism and Islam and are a threat to the peace, harmony, and security of a nation.  They simply don’t respect the otherness of the other.

We condemn any form of bias towards Hindus or Hinduism.

Neither Hindus are terrorists nor Hinduism is,  it is a group within Hinduism that follows Hitler and Mussolini’s ideology of the supremacy of their group that is dangerous to India’s cohesive social structure, and sadly it is creeping into the United States of America. It is identical to ISIS and Al-Qaeda who want to force others to obey them or live under them as second-class citizens or disappear somewhere. Hindutva is the Hindu Taliban, the Hindu counterpart of the Muslim Taliban.

I have relentlessly fought against the phrases Islamic Terrorism and Muslim Terrorists over the years. Fox New’s Stuart Varney agreed not to use those phrases, and Sean Hannity had also agreed once, but with ISIS he resumed his attacks. Those phrases are not only offensive but downright stupid; let me explain why.

When you witness harassment and lynching of Christians, Muslims, Dalits, Sikhs, Atheists, Moderate Hindus, and others, you are tempted to blame Hindus and express your anger by recklessly calling them “Hindu Terrorists” or even blaming the religion.  In the last few weeks, I have made a point in several meetings. Neither Hindus are terrorists nor are Muslims. 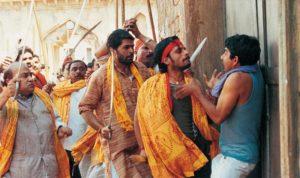 That is what happened in Iraq, the lynching and harassment of Christians, Shias, and Yazidis led the people to call them “Muslim Terrorists.” The wrong-doers did not follow their religion, had they followed, they would not have killed a single human. Quran forbids killing even a single soul, let alone suicide. Hinduism respects every form of life.  In both cases, the average Hindu and the average Muslim condemn these acts.

Look at it this way, if a rapist is running around in your neighborhood, everyone is cautious and watches out for strangers.  You are careful to close the doors and accompany your wife, sister, mother, and daughter when you are out. It is certainly difficult for a single woman or a woman household. But when the rapist is captured and punished, we all feel secure again and breathe fresh air.

The killers and lynchers are no different than rapists; we need to capture them; it will free society from anxiety,  and we trust that righteousness will return to the community. Mr. Modi’s party felicitates the criminals instead of punishing them.

Blaming the religion does no good because you cannot kill, hang, bury, or shoot it as it is intangible, and amounts to barking in the dark.  What a stupid thing to do.

The source of terrorism comes from cult leaders. These men are good orators and dupe ‘some” people that they are superior to the others. They convince the simpletons that their way of life is threatened. These simple men fall for it and spend their whole lives hating and scheming to annihilate the other or show them their place instead of living their lives and letting others live theirs.

These men are in every religious, social, and cultural group.  Osama Bin Laden, Abu Bakr Baghdadi in the case of Islam, Hedgewar, Veer Savarkar, Guru Golwalker, and even sneaky Modi, in the case of Hinduism.

“Hinduism is a religion, guiding one to live a meaningful life, whereas Hindutva is a political movement claiming Hindu belief to be superior to others. Hinduism guides people towards moksha or salvation from the conflicts of life and frees them, whereas Hindutva guides people to acquire political power and subjugate all others – and of course, live in tensions forever. What a dumb thing to do.

Hinduism places emphasis on humility and not arrogance. Indeed, if anyone believes that his/her faith is superior, he or she has not understood the religion. Simply put the purpose of life in Hinduism is four-fold, to achieve Dharma, Artha, Kama, and Moksha. Dharma means living righteously and acting morally and ethically throughout one’s life.  Artha means honest work to live a good life and Kama is about fulfilling desire and passion in one’s life. Finally, it is Moksha – freedom from the cycle of life, and to me, it means living freely with the least tensions and least conflicts – that that is what paradise is all about.

Even though the word Hindutva has Hindu in its name, it is not Hinduism by any stretch of the imagination. It is a political movement like Al-Qaeda, ISIS, Nazi, right-wing Zionism (not Zionism), KKK, Neocons, Taliban, and others.

The Hindutva movement has been described as “fascist in the classical sense,” adhering to a disputed concept of homogenized majority and cultural hegemony. Savarkar’s (one of the fountainheads of the movement) ideology meant the socio-political force to unite all Hindus against foreign influence.” It is like Christians in America wanting to give a boot to all others who are not Christians, and that is what the Hindutva forces want to do in India to boot 230 Million Christians and Muslims.

Haaretz writes. “Hitler and Mussolini have inspired the fountainheads of the Sangh Parivar. “In 2004, when Indian Prime Minister Narendra Modi was the Chief Minister of Gujarat, school textbooks published by the Gujarat State Board portrayed Hitler as a hero and glorified fascism. The tenth-grade social studies textbook had chapters entitled “Hitler, the Supremo,” and “Internal Achievements of Nazism.” The section on the “Ideology of Nazism” reads: “Hitler lent dignity and prestige to the German government. He adopted the policy of opposition towards the Jewish people and advocated the supremacy of the German race.” Further praising Hitler’s “inspiring leadership,” “achievements,” and how the Nazis “glorified the German state” so, “to maintain a German race with Nordic elements, [Hitler] ordered the Jews to be persecuted.”

A growing contempt for India’s minorities manifests itself in racist remarks passed with casual insouciance.

We are Our Nationhood Defined is a book by the Rashtriya Swayamsevak Sangh (RSS) ideologue MS Golwalkar.

“”…To keep up the purity of the nation and its culture, Germany shocked the world by her purging the country of Semitic races – the Jews. National pride at its highest has been manifested here. Germany has also shown how well-nigh impossible it is for races and cultures, having differences going to the root, to be assimilated into one united whole, a good lesson for us in Hindustan to learn and profit by,”

Hinduism has always been a pluralistic tradition, and it has welcomed Judaism, Christianity, Islam, Baha’i, Zoroastrianism, and other cultures into its fold. All religions have thrived in India, just like they do in the United States.

Religion is never the problem, it is the small band of people that create a mess.

To get a complete picture of the dangers of Hindutva in India and here in the United States, please read the links provided below

Here is an unnecessary Long but pointed dialogue between Bhakt (member of Modi cult) Bannerjee and Devdutt Patnaik https://youtu.be/sVigXMCw1mY

Dr. Mike Ghouse is a thinker, author, speaker, newsmaker, and interfaith wedding officiant. His new book American Muslim Agenda is available on Amazon. He is committed to building cohesive societies and offers pluralistic solutions on issues of the day. His information is linked-in.