I could not sleep and have been deeply troubled in figuring out how to deal with the onslaught of attacks from a ‘few’ Muslims for writing the following letter to Mr. Trump.  I hope they see the wisdom in it.

As a Muslim, I strongly believe that engaging with people who differ with us is the right thing to do, at least we will increase the chances of building  a relationship and ultimately learn to live with each other’ differences.  What is the other choice? Accuse them, blame them and cause them to dig in their heels and wipe out any chances of reconciliation, is that the right thing to do?

As a Muslim, I believe, Prophet Muhammad was a mercy to mankind. Simply meaning each one his actions was geared to mitigate conflicts and nurture goodwill. Indeed, I call it his formula of peace and give a full speech on the topic narrating at least 15 of his actions that led to building cohesive societies.  For the sake of peace, the Prophet reached out to his perceived enemies and made deals with them for the common good of all people.  As his genuine follower, I intend to engage with Mr. Trump who is not my enemy, but may not have the whole picture about Muslims is his album and I like to make an effort to complete it. I am willing to fail, but not willing to sit by irresponsibly. 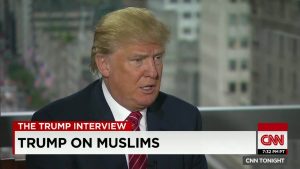 A few of my fellow Muslims will be upset with me, and all I can do is ask them to think about Prophet Muhammad, and honor him by following his practices. He had made deals in Mecca and Hudaibiyah treaties against the wishes of his associates, at the end, all were beneficiaries.  When he was physically hurt by the miscreants on his way to Taif, his associates wanted to knock them dead, even Angel Gabriel offered to crush them, but what did the Prophet do? He prayed to forgive them, for they know not.

However, I was encouraged by the words of wisdom from Dr. Zafar Iqbal of Gopio Washington, he mentioned that if Prophet Muhammad (pbuh) had not reached out to fellow beings who were opposed to his mission, the world would not have changed. Indeed it is necessary to to talk with fellow beings who are even our enemies. Prof Faroque Ahmad Khan confirms, “Regarding the question of meeting with DT and his team I see no downside.”

I request my fellow American Muslims to consider Prophet Muhammad’s approach; that is let our talks, actions, and writings be embedded with the idea of mitigating conflicts and nurturing good will.  If we can learn to respect and accept God’s intentional choice to make us into different tribes, nations and religions, then conflicts fade and solutions emerge. If you disagree with God, you are welcome to take it up with him. He says, the best ones among you are those who learn about each other and remove the myths about the other to create peace, which was capped by the immortal sentence by our prophet, “Blessed are the peacemakers.”

Here is a letter to Mr. Donald Trump

Donald, you have made history!

This note is an acknowledgement that you have proved the naysayers wrong including me.  I am pleased to share the following points with the hopes that you consider reflecting on them with humility.

I am deeply committed to a cohesive America, and will be happy to consult how we can build such an America by offering pluralistic solutions on issues of the day.

Mike Ghouse, is an American Muslim committed to a cohesive America and offers pluralistic solutions on issues of the day, more about his work at-  www.centerforpluralism.com