Lailat al Miraj is also called Shab-e-Meraj.  Lailat is Arabic and Shab is Persian, Urdu and Hindi version of the phrase.

It is important to mention that this journey is interpreted in two different ways.  It is a spiritual journey to some, and a physical journey to the others, it is a matter of faith and how you came to believe.  Fortunately, Pluralistic practices have existed in Islam, even though one believed one way or the other, he or she rarely denigrated the other.   Most Muslims have a pluralistic attitude towards each belief, i.e, accepting the other without calling it wrong.

Personally, I believe it was a spiritual journey and have no problem if others believe it was a physical journey – the bottom line is what did prophet do with the journey? Among the guidance to live, he brought in 5 prayers a day, fasting, Zakath and other pillars of Islam. 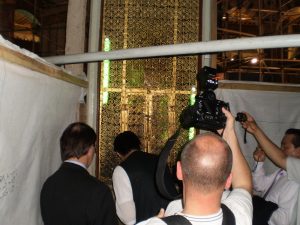 Please note that in a Muslim calendar, a holiday begins on the sunset of the previous day, so observing Muslims will celebrate Lailat al Miraj on the sunset.

The day is observed on the 27th day of Rajab, the seventh month in the Islamic calendar.

Customs and traditions that center on Isra and Mi’raj vary in the United States. Many Muslims make special prayers in the evening. Some people attend prayer services and sermons at Islamic centers or mosques while others observe Isra and Mi’raj quietly at home. Some Muslims celebrate the event over two days.

This event gives people the chance to reflect on the importance of prayer. It is a time for people, particularly students, to learn more about Isra and Mi’raj, what it means in the Islamic faith, and how it is applied in practice.

According to Islamic belief. One night during the 10th year of Muhammad’s prophecy, the angel Gabriel woke him and traveled with him to Jerusalem. Muhammad prayed at the site of the Temple of Solomon with the prophets Abraham, Moses, Jesus, and others.

The Prophet Muhammad then rose to heaven (carried by Gabriel) from the rock of the temple mount, where many people believe that the Dome of the Rock sanctuary now stands. Allah instructed Muhammad about the five daily prayers that all Muslims must observe. This day is also known as the Night Journey. 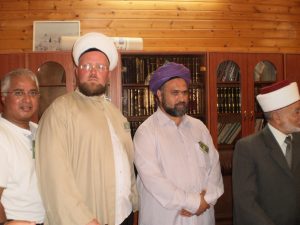 The Imam from Germany, Netherlands and I meeting with the Mufti of Jerusalem.