December 11, 2016, Washington, DC — The 3rd Annual Summit of Rabbis and Imams was held today at Tifereth Israel Congregation in Washington, DC. The theme of the summit was standing up for each other and building enduring relationships to contribute towards the cohesiveness of America, an America where no one has to live in apprehension or fear of the other. 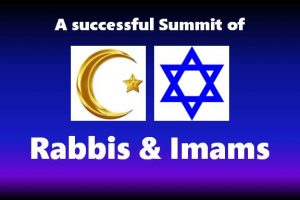 Story after story was shared. A seven year old boy asks his father on the next morning after the elections, “Dad, are we going to be kicked out of America now?” Another six year old girl asks the same question to her father and follows it up with, is any one in our family going to be deported?” A woman with a stroller and the baby was stopped by a guy driving the truck, who did not want her to cross the road. Swastikas were painted on some Jewish homes and synagogues and anti-Jewish statements have been made. A dramatic rise in Anti-Semitism /Islamophobia in particular and other phobias in general have caused a great deal of concern.

Collectively, mistakes have been made over the years, we have talked extensively about the issues facing Women, African Americans, Jews, LGBT, Muslims, Mexicans and all others except one group, the unemployed/ underemployed rural white Americans who were affected equally like all others.

Hillary Clinton did not extend a ‘specific’ hand of friendship towards them, had she done that, the story would have been different. This neglect has caused a severe damage to the social fabric of our nation; everyone is apprehensive and has lost trust in each other to function effectively. At least from here on we must include everyone in the dialogue, and as an individual my efforts would be directed towards reaching the disaffected ones. We cannot exclude anyone from our conversations. Our first priority ought to be making peace with those who are perceived to be polarized; without them, we remain polarized.

The first part of the summit was organized as round table talks – A Rabbi, Muslim and others were seated alternately around the table with a given set of questions to identify the problems and offer solutions over the fabulous lunch.

Walter Ruby, Muslim-Jewish program Director, Foundation for Ethnic Understanding said, “The main issue at the Summit will be how to respond to the election and how Jews and Muslims can work together in support of each other if either community is demonized, discriminated against or the victims of hate crimes or government repression.”

If Muslims were to run into a dire situation, most Americans will stand up for Muslims out of a sense of fairness and justice, and we know darn well that Muslims will reciprocate it wholeheartedly out of a sense of gratitude and inherent caring for fellow beings.

The group then moved to the sanctuary to watch a sampler of a play about what transpired during the City council hearings when Muslims of Naperville applied for a permit to convert a dilapidated building into a Mosque. This was a play on the real story about the Ground Zero Mosque and was performed well. I was involved in it from day one when all that happened: Pamela Geller was out on the street protesting and on that day Sean Hannity pitted me against her on his radio show. A whole blog is dedicated to the issue. http://groundzeromosque.blogspot.com/

The initial message from the organizers stated, “At a moment of heightened bigotry and increased demonization of Muslims, Jews and other faith communities, rabbis and imams will affirm our commitment to stand up for each other and for religious freedom, pluralism and democracy.”

Jonathan Greenblatt, director of the Anti-Defamation League (ADL), which campaigns against anti-Semitism and other bigotry, said he would register as Muslim if the database is created because of “painful memories” from when Jews were “identified, registered and tagged”. That sentiment was echoed by virtually every Rabbi and laity present in the sanctuary.

A few remarks from the organizers:

Daniel Spiro, Coordinator, Jewish-Islamic Dialogue Society of Washington (JIDS), “The most important theme I tried to convey in my remarks is that there are so many synergies that arise when Jews and Muslims engage with each other. We can grow theologically, learn from each other’s experiences as misunderstood minorities, and become true peacemakers. Muslim-Jewish engagement is a must.”

Steve Sawmelle, “The most valuable part of the program was the culminating plenary session where concerns, and then suggestions, were expressed by Summit attendees. There was a palpable feeling of unity in the room as we discussed concrete action steps to take.”

Andra Baylus, lead coordinate of the Greater Washington Muslim-Jewish forum. “”The challenges we face today are huge, for they touch upon the core of humankind’s inability to accept our differences, whether it be ethnic or religious. This Summit today is about Imams and Rabbis rising above these multifaceted differences given to us by our Creator, to teach their respective communities to strive to see the Light of God shining in the face of the “other”, recognizing that we are all beloved brothers and sisters in the Family of Humanity, who are guided by the values embodied in our religions, destined to transform dissonance into harmony, indifference into compassion and, most important of all, mistrust and hate…. into love.”

My roaring thoughts were, how do we get this message to the world around us? As an American and a Muslim committed to building a cohesive America, where no American feels excluded or alienated, this event was uplifting and this good news must reach all Americans.

Here is another great opportunity for Muslims and Jews to come together to strengthen the bonds. Our issues are not Muslim, Jewish, Christian, Hindu, Sikh, Bahá’í or the other. They are American issues as they affect us all in functioning effectively, and together as Americans we have to find solutions. No American has to live with the feeling of alienation or apprehension or fear of the other. We are all in this together and stand with fellow Americans for the common good of every American.

No good is sustainable unless it is good for all. Imbalance or injustice leads to more of it.

Mike Ghouse is a community consultant and is committed to building a cohesive America. He offers pluralistic solutions on issues of the day. All about him is captured in 65 links at www.MikeGhouse.net