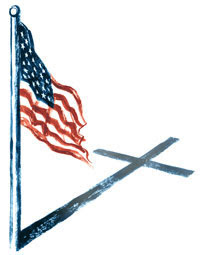 A Nation has boundaries, where as Religion does not, and we should not contain religion into national boundaries.
The following article is reflective of America, the one that I envisioned, where freedom of expression, freedom of association and freedom of thought and just pure freedom is the essence. America is all about freedom to me, the freedom that comes with duties, rights and responsibilities.The separation of church and state is a value we ought to be proud of, and that is one of the values that makes our nation a great country.

We are going to enjoy the fire works sitting across our home in Coyote Ridge, with a panaroma of fire works across the city, on the top of the hill across the pond. Not Henry David Thoreau’s, but our City’s.

Let me add a historical tid-bit; The first three nations to recognize the independence of United States of America were; France, Morocco and the Kingdom of Mysore (Karnataka State in India). The Sultan of Mysore, Tippu Sultan, sent the letter (which sits in French Museums) congratulating the nation and celebrated the freedom by Fire Crackers. This part of the history was researched and published by Dr. Range Gowda, my friend in Bangalore.
Those who live in Dallas can join us to watch the fire works, Bring your own chair and enjoy the freedom.

http://www.mikeghouse.net/
http://blogs.usatoday.com/oped/2007/07/faith-shouldnt-.html
Faith shouldn’t be red, white and blue
Patriotism and religion each hold a prominent place in the American story. That’s as it should be. To wed the two, however, is a disservice to patriots and to the faithful.
By Tom KrattenmakerThe Fourth of July is a time for Americans to honor our country and, for the many religious people among us, to honor God. But as the fireworks explode on Independence Day, let’s resist an all-too-common tendency these days to drape the American flag around the Christian cross. Let’s remember that religion is not patriotism, that patriotism is not religion — and that when we combine them both with a glorification of American military might, something has gone disturbingly askew.

Sadly, the distinction between faith and martial-tinged patriotism seems lost on some of our most fervent advocates for the military and religion. Rewind to Memorial Day weekend, when a Christian organization called Task Force Patriot USA and other groups staged a three-day salute to the troops at Stone Mountain Park in Georgia. Drawing about 100,000 people, the celebration featured Christian worship services and Bible giveaways, speeches by retired military personnel and Air Force jet flybys.

Not to single out Christianity. After all, a cross-themed celebration of the military is harmless next to jihadists who kill in the name of religion. And U.S. troops certainly deserve appreciation. Yet one has to ask: Do Christian worship and Bibles really belong with demonstrations of U.S. military might?

For one evangelical leader here in Oregon, the conflation of patriotism and Christianity reached the point where he took action that’s considered anathema in many conservative church communities: He publicly spoke out against what was happening at his church.

Bob Hyatt, now pastor of the upstart Evergreen Community in the Portland area, worked on the staff of a local megachurch in the fevered period immediately after the 9/11 attacks. Despite being raised and educated in a strict Christian conservative environment in which the United States was regarded as God’s favored nation, Hyatt was aghast to find the sanctuary frequently decked out in red-white-and-blue bunting with a pair of 50-foot American flags. In the Sunday service nearest the Fourth of July, congregants recited the Pledge of Allegiance and sang patriotic songs. As the pattern continued through the early months of the Iraq war, Hyatt could hold his tongue no longer. At a pray-for-our-troops rally at the megachurch, he took a turn at the microphone and cited the teachings of Jesus in making the unpopular suggestion that the congregants also pray for Saddam Hussein and the Iraqi people. He went on to write an Internet article titled, “Profoundly Disturbed on the Fourth of July,” which was not well-received at the church and led to his leaving its staff.

‘We were worshiping America’

There is considerable practical wisdom in the old saying about atheists in foxholes. A complete separation of faith and patriotism in a time of war is as unlikely as expecting religious soldiers not to turn to God in the face of enemy fire, and as unreasonable as expecting Christian believers to pray equally for al-Qaeda fighters and U.S. troops. Right or wrong, we have a long tradition of political and military leaders invoking God in non-neutral ways during times of war.

During the crucial D-Day invasion, President Franklin Roosevelt took to the airwaves with an appeal to “Almighty God” to “lead (our men) straight and true; give strength to their arms, stoutness to their hearts, steadfastness in their faith.”

Would those words arouse the ire of Americans today? Of some, probably. My own response to Roosevelt’s religious invocation is colored by indelible memories of my visit to the World War II cemetery in Normandy. I still have vivid mental pictures of the graves of the American soldiers, of the crosses laid out in row after solemn row. Interspersed throughout the cemetery were many Stars of David, rising over the graves of the fallen Jewish soldiers whose role in the fight has special poignancy.

No doubt, faith has long played a role in the American military, but it has been an inclusive faith, one respecting a diversity of denominations and religions, with chaplains of different stripes available to assist soldiers on their own religious terms. Contrast that with what’s been happening in the military in recent years, where sometimes-coercive Christian evangelizing has triggered lawsuits and lent a crusader overtone to the fight against terrorism. Contrast that inclusive tradition with rhetoric that portrays Jesus as America’s “commander in chief” and efforts by a group called Christian Embassy to proselytize to our diplomatic corps and military leadership. Is militaristic Christian nationalism really where we want to take this country and our dominant religion?

Illinois Sen. Barack Obama recently spoke of the danger to our critical thinking ability when we become too convinced of America’s righteousness and God’s allegiance with the United States. While acknowledging the evil of the 9/11 attacks, Obama sounded this note of caution: “The danger of using good vs. evil in the context of war is it may lead us to be not as critical as we should be about our own actions.”

Obama went on to cite the prisoner abuse scandals at Abu Ghraib and “unjust” detentions at Guantanamo as examples of the abuses of which we are capable when we become too convinced of our inherent God-sanctioned goodness.

‘The light is the light of Christ’

The progressive evangelical leader Jim Wallis has sounded similar warnings to Christians who might go too far in mixing their patriotism and faith. Wallis has repeatedly chided President Bush for voicing a theology that speaks of America as “the hope of all mankind the light (that) shines in the darkness.”

Wallis acknowledges the biblical foundation of such language, but he adds, it is important to note that, “In the gospel, the light shining in the darkness is the Word of God, and the light is the light of Christ. It’s not about America and its values.”

God and country — the two live side-by-side in the hearts of many tradition-minded Americans. Yet faith and patriotism are different ideals that at times require vastly different allegiances. Given the reality of religious pluralism in America, the government cannot rightly become the instrument of any one form of belief. Conversely, our country will not always do right — no nation can — and only by maintaining its distinct identity can religion retain its ability to call people to conscience.

May patriots honor the flag on the Fourth of July. And may religious people revel in the beauty of their faiths. But let’s remember that being Christian is not a requirement of patriotism. And that patriotism is most assuredly not a requirement of being religious. Let’s honor the flag and faith — by keeping a reverent measure of distance between the two.

Tom Krattenmaker, who lives in Portland, Ore., specializes in religion in public life and is a member of USA TODAY’s board of contributors.