Guru Gobind Singh’s 350th birth year celebrations. In India, particularly in the state of Punjab, huge celebrations are planned. He was the tenth of the ten Sikh Gurus, the eleventh guru being the living perpetual Guru, Guru Granth Sahib (the holy book of Sikhism).  Like his contemporaries of the time, he was a statesman, philosopher, poet, warrior and a religious leader. 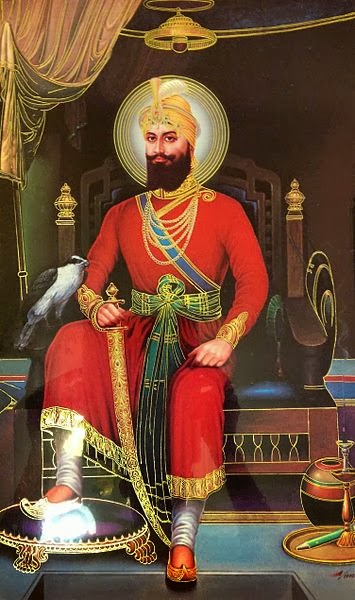 Guru Gobind Singh gave the final shape to an evolving Sikh faith around 1700 AD.  He opened up the initiation ceremony (sort of Baptism) with five men by sprinkling water on them. He also branded the faith with a slogan ‘Waheguru ji ka Khalsa, Waheguru ji Ki Fateh’ – Khalsa belongs to God; victory belongs to God).  He gave them the name “Singh” (lion), and designated them collectively as the Khalsa, the body of initiated Sikhs.

His greatest contribution to the world was keeping the ethos of Pluralism alive in a time when a ruthless Mogul King was bent on annihilation of other religious traditions. He stood up against the mighty empire and thus other religions survived.

The Guru also established distinct identity for the Sikhs with 5 unique items.

His first address to the first Sikh Congregation.

” From now on, you have become casteless. No ritual, either Hindu or Muslim, will you perform nor will you believe in superstition of any kind, but only in one God who is the master and protector of all, the only creator and destroyer. In your new order, the lowest will rank with the highest and each will be to the other a bhai (brother). No pilgrimages for you any more, nor austerities but the pure life of the household, which you should be ready to sacrifice at the call of Dharma. Women shall be equal of men in every way. No purdah (veil) for them anymore, nor the burning alive of a widow on the pyre of her spouse (sati). He who kills his daughter, the Khalsa shall not deal with him.”

“Festivals of the World” is an educational series published by Mike Ghouse since 1993. When we live in the same communities as neighbors, we might as well learn about each other. The best way to build cohesive societies is for its members to participate in festivities as well as commemorations of each other, or at least understand each other’s’ joys and sorrows. Please note the simplicity in writing is designed for people of other faiths to learn and to know, so we can function cohesively.  This is too elementary for the followers of the faith, but informational to those who are not aware of the tradition.