Ridvan is a twelve-day festival in the Baha’i Faith, commemorating prophet-founder Baha’u’llah’s declaration that he was a messenger of God and the promised one of past religions, charged with bringing a new message of world unity and peace to humanity. 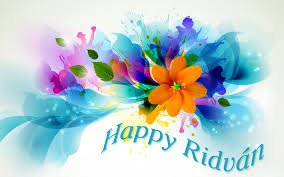 The festival begins at sunset on April 19 and continues until sunset, May 1. Ridvan means “paradise” in Arabic, and is named for the Garden of Ridvan outside Baghdad, where Baha’u’llah – who had been cast out of his native Persia by governmental and religious authorities – stayed for twelve days in 1863. This stay preceded his exile from Baghdad to Constantinople (present-day Edirne) by orders of the Ottoman Empire. The time that Baha’u’llah spent at the Garden of Ridvan, and the associated festival and celebration, has great significance for Baha’is.

These holy days are called the “Most Great Festival” and the “King of Festivals” in the Baha’i sacred writings, and the first, ninth, and twelfth days are observed, meaning that work is suspended and commemorations are held. Baha’u’llah describes the first day of Ridvan as the Day of supreme felicity. While the Baha’i Faith does not have clergy, it is also during the festival of Ridvan that Baha’is around the world elect local and national councils – called Spiritual Assemblies – to attend to the administrative needs of their communities.

And here are a few links that may be helpful:

The Life of Baha’u’llah – a photographic narrative