Congratulations to all the human rights activists around the world for their efforts in seeking the release of Asiya Bibi.  The Supreme Court of Pakistan has finally acquitted Asiya Bibi of the Blasphemy Charges.

While the virus of “Authoritarianism” is severely infecting many nations, the supreme courts of the lands are delivering justice around the world. 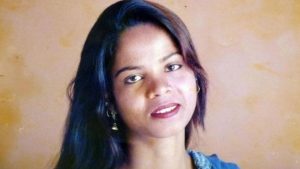 The Blasphemy Laws are a stain on civilization. They were a tool of oppression of the colonial empires to quell the uprisings against their grip on the colonies. Both India and Pakistan wrote those laws into their Penal Code under Section 295A, and it is time to remove these laws from the books.

The Muslims were misled to believe that Blasphemy Laws are Islamic, on the contrary, they are anathema to the values of Islam. Islam is about free will and free speech. I hope Muslims wake up to this nugget of Islam.

Prophet Muhammad did not punish anyone for blasphemy.  Instead, he did the right thing; prayed for them.

The blasphemy laws go against the God-given freedom, and it aids the tyrants to abuse it. In Pakistan, a man framed a girl for desecrating Quran, and Joseph Colony, a Christian town was destroyed before they discovered the truth.

A Petition was written years ago, urging the Pakistani Government to release Asiya Bibi, and an apology from Muslims to Christians was a part of it for causing fear and apprehensions.  Many a Muslims refused to sign because of the inclusion of the word ‘apology.’ They were willing to sign if the ‘apology’ was removed. We chose not to.

Appeal for Justice to Asia Bibi and mercy to humankind
To:  The People, Ulema and Government of Pakistan

Prophet Muhammad (PBUH) is a mercy to humanity, he is indeed a blessing to the mankind and rightfully known as Rahmutul Aalameen. There are innumerable examples of forbearance, forgiveness, and kindness of the prophet (PBUH) towards those who insulted and even tried to harm him.

One of the most famous stories, often repeated is about an old lady who threw trash on the prophet every time he passed in front of her door. One day, the lady did not throw garbage at him. Concerned, he asked the neighbors and found that she was sick. He knocked on her door to and offered help. Overwhelmed with kindness and love, she chose to become a Muslim.

Once on the way to the city of Taif, the Prophet was pelted with rocks by miscreants, his associates wanted to retaliate, even the archangel Gabriel offered to help bring relief to the situation. The prophet said no, instead he asked God to forgive them because he was the last messenger. If they were destroyed to whom would they preach? He hoped that if not them, their progeny at will accept the God-sent message to humanity.

He enjoined us that “if anyone eats a full meal when his neighbor is hungry or starving, then he is not from among us.” He never said ‘Muslim neighbor.’ He loved humanity and asked Muslims to be role models of charity, kindness, concern, and love to all.

What was the need for the Prophet to have endured such painful experiences? It was to guide humanity towards kindness and shape long-term solutions for peaceful communities and the greater good of the society at large. He was committed to mitigating conflicts and nurturing goodwill; indeed, he was the ultimate peacemaker, mercy to humanity.

As Muslims we need to keep his message of kindness alive and bring to fruition what he was all about; Rahmutul- Aalameen. Let the mercy and compassion he taught become a blessing to the universe and continue to shower on humanity.

We appeal to the Ulema, thoughtful people and the Government of Pakistan to give life to the examples of the Prophet in representing Asia Bibi. What would Rahmutul Aalameen have done?

Asia Bibi is not a Muslim, and her menial work was considered unclean (Napak) by others, who believe themselves to be good Muslims, denied her water from the common source. Is this not a most egregious insult, and the denial of water, the same as a denial to sustain life?

First of all, he (The Prophet) would not have denied Asia Bibi the water of life, indeed in another famous occurrence, a person fed water to a thirsty animal and the Prophet had said God would grace the person for that act of kindness. He would have been kind and magnanimous and would probably have us pray for Asia Bibi’s wellbeing. God loves the forgivers and those who repent. Let the mercy and compassion he taught become a blessing to the universe and continue to shower on humanity.

We owe an apology to Asia Bibi, her family, and the Christian community. We should build goodwill in our and their hearts.

We ask the people of Pakistan to debate about the blasphemy laws seriously. The violent silencing of Governor Salman Taseer calls for an immediate need for a discussion on the topic. Islam is about free will and as Muslims we need stand against any oppression towards any human being following in the footsteps of the prophet. Amen!

In humility, we submit this appeal to bring Rahmat (Mercy) and Justice to every human being including Asiya Bibi.

Muslims claim that the prophet was a mercy to humanity, shouldn’t the actions of his followers reflect that attitude towards fellow humans?  Does Asia Bibi see the prophet as a Mercy? Whose fault is that?  The Muslims who denied her water must be punished for their acts, had they given her way ahead of them to take the water for her sick child, she would have not only given the “Duwa” prayers to them but also the Prophet who taught them to be merciful.

Mike Ghouse is a public speaker and the founder and President of the Center for Pluralism in Washington, DC. He also established the think tank, World Muslim Congress in 2001 and is revived now.  He is committed to building cohesive societies and offers pluralistic solutions on issues of the day.   More about him at https://www.linkedin.com/in/mikeghouse/  and http://www.theghousediary.com/mission-accomplished/