No matter how a political candidate behaves, acts and talks, American system offers an opportunity to be president to every American born to an American citizen.  This is democracy at work. 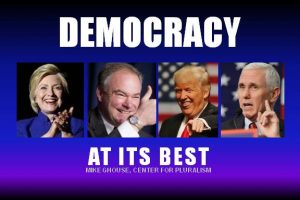 We should not feel embarrassed over what comes out of the mouths of the political candidates. Each one of them has a right to express the range of his or her ugliness and civility, but deep down, every individual in America and around the world wishes he or she had the opportunity to be who he or she wants to be. America offers that and that is what we are blessed with.

The moment one feels entitled to privileges over the others, or dis-entitles others to have the same privileges; he or she is short of understanding the in-alienable rights of others and how democracy works for the common good.

Democracy is the best form of governance that there is, as we the people decide what is good for us, it means we have to live with others despite our differences.

Tim Kaine’s conclusionary remarks in the vice-Presidential debate on October 4, 2016 exemplify democracy and political pluralism – when he said something to this effect, that as a Catholic he has difficulty with abortion and death penalty, but he will set aside his personal belief and follow the law. I applaud his honesty. Donald Trump also said if you don’t want me to take advantage of what is a lawful Tax deduction, change the laws.

Mark my words, the American majority is too good a people not to elect the best, just relax and enjoy the process. We have made mistakes in the past, and I hope we don’t make that mistake this time around. Our democracy is at its best.  All of us have a right to be whoever we want to be, at the end, we always elect the one who is most acceptable (not necessarily perfect) to all of us.

I trust our system and the checks and balances that go with it.  America will continue to be a beacon of hope,  a safe and a stable nation with liberty and justice for all. Not a thing will happen to any one of us, we have the laws that protect us.

What you and I need to do is not throw the most powerful thing we possess; Vote. Don’t flush it down the toilet as a protest vote. Vote for the one who does the least damage to the nation, vote your conscience that which cares for long term public good and not short term victory pleasure.