The Khordad Sal is a Zoroastrian festival celebrated on the anniversary of Prophet Zarathusatra’s birth. Generally, the date of birth of Prophet Spitaman Zarathusatra falls on the sixth day of the Parsi month of Farrardin. The exact year of birth is not known, however, it is believed that he lived during 5000 B.C.-2000 B.C. Similarly, the day of his birth is also not precisely known and the fixing of Khordad Sal as his birthday is symbolical.

On this day, a religious ceremony, Jashan, is held in community prayer halls where prayers are offered to god. A grand feast is prepared to mark the occasion. The festival is an opportunity for the Parsis to review their lives and actions and make resolutions for the future. 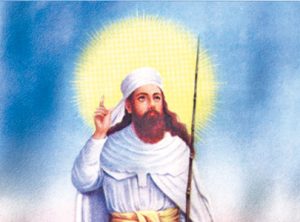 During ancient times people, including kings and nobles, celebrated it as new year day – Navroz-i-khas. On this day, people of all ages smear Vermillion on their foreheads, put on new and clean clothes and eat delicious food.

Khordad is that Divine Energy of Ahura Mazda which presides over ‘time’ and ‘perfection’. It is for this reason that the first ‘Khordad Roj’ of the new calendar is celebrated as Khordad-Sal-Khoday, i.e. ‘Khordad, Lord of the year’. Homage is paid to this Divine Energy of ‘Time’ and ‘Perfection’ in order that the year is filled with happiness and time that is well spent and our lives come closer to perfection. Until a few decades ago, Khordad Sal used to be a general public holiday declared by the State Government.

In Zoroastrian tradition, a number of significant events are believed to have taken place on this blessed day. Gayomard (the first human being), Hooshang (the first King of ancient Iran), Kai Khosraw (a great and glorious King of Iran) and most important of all, Asho Zarathushtra are believed to have been born on this auspicious day.

This day also signifies the triumph of good over evil, for on this day, Shah Jamsheed is believed to have virtually arrested death and disease; the great King Kai Khosraw vanquished the evil Afrasiab and King Vishtasp accepted Zarathushtra as a Prophet. In ancient times, Parsis used to spend this auspicious day in prayers at home and, of course, at Agiary or Atash Behram. It is also considered meritorious to perform jashan ceremony on this day to invoke the blessings of Ahura Mazda and His Divine Energy of Perfection.

Khordad is the Divinity of Perfection and traditionally, this day commem-orates the birth of Prophet Zarathustra whose teachings are timeless and perfect and will remain relevant and perfect in every era. In the sacred Gatha, the Prophet tells us about the choice we all must exercise each day using our mind, which we must strive to illumine every single day of our lives, with practice of right thoughts, good words and noble deeds. His was clearly a reflective religion of moral choice and consequences.

He taught us to be righteous not for the sake of any heavenly reward, but, simply for the sake of righteousness. He neither preached denial nor blood sacrifices. His religion was of Asha (Truth), Raadi (Charity) and Ushta (Happiness).

Today, it pains one to see his so-called followers argue and fight over his religion, moving courts of law and even talk about dying for it … anything but live for it! We live in a perfecting world that’s still far away from the perfect world that Zarathushtra envisioned. But, Zarathushtra has given us a roadmap that can help us take a few steps towards his ideal. Religion is a way of life. Live it. Live it with truth, charity and happiness and that’s all we need to make this world a better place to live in.