It’s a ransom – if you do that, we will do this. Neither Obama administration nor the Republicans budged from their positions to realign the cuts in expenditures and enhancement of revenues to balance the budget. 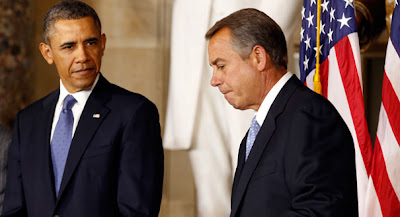 We can survive this $85 billion cut, but is this how we deal with the national issues?
Republicans are assuming that we are not going to make it in 2014, so what the heck, let’s do the thing that needs to be done any way and make Obama look bad. Our intention smells foul.
We have to balance the budget; we cannot spend more than we collect. Indeed, we had a balanced budget when President Clinton left. However President Bush, the macho man loaded with revenge seeking testosterone’s had to lie to us to go to war and that is where our destruction began. His actions killed over 5000 of our soldiers and nearly a million Afghans and Iraqis – for what?  He piled up a reckless debt of $10 Trillion dollars. That was irresponsible, had he done what Obama did, to go get that one guy Bin-Laden; we would not be in this mess today. Cheney and Bush owe an apology to the nation, their karma is messed up, but they have messed us up.
The blame must be placed squarely on the party leadership. The Republican Party programs its members to be sheepish; to shut up and listen to the boss. How many Republican were belligerent towards Bush?  We are freaking conformists in a free nation. We have become cowards and don’t have the balls to speak out against our own. It is time to change. I see hope in Chris Christie, John Huntsman, Colin Powell and many more that are speaking up, and add to that list, this little man from Dallas, Texas who will relentlessly pursue the case for sanity in our party.
Had we questioned President Bush and demanded the truth from him, we would have saved the nation, but that is behind,  right now,  we have to cut spending. Cannot continue with deficit financing of our state.
President Obama needs to be aggressive in cutting spending; there is a lot of wasteful spending that needs to be cut. Let it begin with huge pay cuts for the elected representatives, not the ones who make less than $100,000 but any pay check above that. They can demonstrate to the nation that they mean business.
The Republicans on the other hand need to have some common sense, we cannot go cold turkey on budget cuts, and it has to be a gradual and balanced approach over a period of 6 years without hurting the economy. But cuts, we must make.The good thing about Moderate Republicans is they care for their country more than their party and they will save the party and not the right wingers among us.  We need to have a simple (not the arrogant) majority in the house and Democrats to have the simple majority in the Senate. These guys need to fight and spend time on each bill – there shall be no slam dunk of any bill. Most of the evil decisions were made when all the three branches of government were of the same party.  As a moderate Republican I detest a monopoly of the party over our governance.If we don’t change our stinking attitudes we will be slaughtered in 2014, all these Taliban’s, 22 of the Republican Senators and some 138 Republican Congress persons must go for voting against women’s equal rights act in the senate. What a shame! I expect more of us Republicans to speak out against these primates.
URL- http://theghousediary.blogspot.com/2013/03/sequestration-2013-republican-mess.html
……. Mike Ghouse is a speaker, thinker and a writer on pluralism, politics, peace, Islam, Israel, India, interfaith, and cohesion at work place. He is committed to building a Cohesive America and offers pluralistic solutions on issues of the day at www.TheGhousediary.com. He believes in Standing up for others and has done that throughout his life as an activist. Mike has a presence on national and local TV, Radio and Print Media. He is a frequent guest on Sean Hannity show on Fox TV, and a commentator on national radio networks, he contributes weekly to the Texas Faith Column at Dallas Morning News; fortnightly at Huffington post; and several other periodicals across the world. His personal site www.MikeGhouse.net indexes all his work through many links.