The Ambassador-at-large for religious freedom, Hon. Sam Brownback and I have many things for us to work together. I presented him with five items today which he will study. They are;

Our goal at the Center for Pluralism is to build cohesive societies where each one of us lives freely without apprehension and fear.  There is hope for humanity. 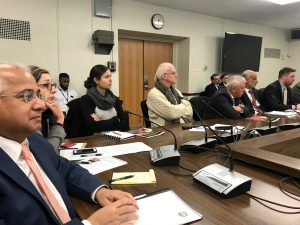 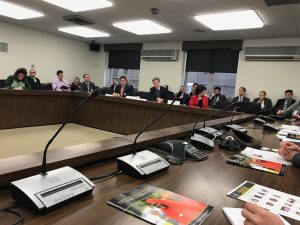 Mike Ghouse offers pluralistic solutions on issues of the day. If you have an interest in, I will be happy to talk about it.

NOTES ABOUT THE AMBASSADOR – 605 words

I have noted some of the critical points of his speeches and conversations, each time I have listened to him. Ambassador Brownback made statements (paraphrased), that gave me immense hope and confidence about the future of religious freedom around the world.

What makes you invest in a community or a nation? Apparently, the profits and security for your investments are the essential reasons. If a country is messed up with civil strife and religious conflicts, followed by lynching, harassment, and discrimination of people, investors don’t want to risk their hard earned monies and will start pulling out of it, as they did in South Africa. If not checked, India could become another example.

We ask the United States Government to seriously consider upholding the dignity of the individuals by preventing tyrants from expelling the weak. We have to stop the trends set in the past to absorb the refugees and legitimize the eviction. Those who are out, we must absorb, but at-once prevent people from being expelled from their lands.

I am disappointed that the visitor’s program at the Department of State was not capitalized to build upon the relationships that developed over a period. All I see is opportunities missed to teach our values of freedom, free speech and a chance to seed the idea of inclusive societies across the world.

Over the years, through the visitors’ program, I have met groups from nearly 56 Muslim majority nations in addition to Muslims and Christians from Russia, China, UK and other countries. The groups included religious clergy, ministers, and educators.

There is a dire need to address the violations of religious and political freedoms in South Asia comprising the nations of India, Pakistan, Bangladesh, Nepal, and Sri Lanka.

There are pending issues that are simmering and may boil over one day. We hope to understand these issues and do our share of reporting them to the International Religious Freedom Round Table, an informal group.

Our group will identify problems and offer recommendations and possible solutions, and they are;

1. Monitoring to ensure the individual rights of people are protected.
2. Facilitate democratic values and hoping for stable political and economic climate
3. Secure our long-term interests of the safety of Americans and their investments

All this will be published at www.CenterforPluralism.com with the same titles in a few days.