TODAY’S STORY – A Female Doctor was caught in Michigan cutting female genitals. By the way, it was legal in the United States till 1996.  Quite a lot of research is done on the topic and the links are at World Muslim Congress.

Cults have their own secret practices, and anything secretive is cult. It is controlled by one live person, usually male, and they are small private groups right amongst us. 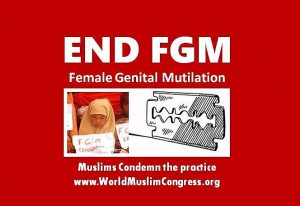 In the disappearing patriarchal societies, men controlled how women should live.  These men did not believe women should enjoy sexual pleasures, so they decided to cut the female part of the genitalia –that gives them pleasure. The Europeans placed chastity belt on women so they remain untouched by other men.

Here is my theory – these men are impotent – they are bang-slam thank you Ma’m Kind of men, they did not want their woman to know about the joys of sexual pleasure that both men and women can equally have, and they +reduced her to the role of procreation. The European men chose the belt, so the woman will never knows the joys of sexual pleasure while they are out in the wars.

These cults are found among Christians, Muslims, Hindus and Native traditions.  Most of these cults are vanishing, however, there are still some out there.

In India and China, shamelessly, even today female infanticide is common. A female baby is a curse to these cults and many families abort the babies, you hear it often among Hindus, Muslims and others. Please beware, it is not a religious practice, neither Islam nor Hinduism will tolerate this, but the secret practice is around.

The Bohra Community among Muslims believes in Female Genital Mutilation, not all of them do, and it is a new thing to disobey their chief and dissent is growing among them.  Several years ago, I wrote to the head of the group to simply issue one single Farman (directive) to put an end to the practice among that community. There are petitions going on to no avail. But it is coming to an end soon, all bad things have to come to an end. God willing, I will write another article and seek active support from Muslims around the world to get out and condemn this practice and I hope the Christians and others do their part as well.

Dr. Mike Ghouse is President and Executive Director of the Center for Pluralism committed to building a cohesive America where no American has to live in tension, apprehension or fear of the other. He is a pluralist, thinker, writer, activist, motivational speaker and a news maker. He offers pluralistic solutions on issues of the day. More about him in 65 links at www.MikeGhouse.net