Delhi: Once again, Jamia Nagar in Delhi is going to witness a show of solidarity and unity on eve of Eid Ul fitar when people from Sunni and Shia sects will offer Eid prayers in Congregation at the inner Courtyard, Jamia Juma Masjid of Jamia Millia Islamia.

“Shoulder to Shoulder Movement” is an initiative conceived by a group of friends last year in Jamia Nagar, against the back drop of growing hostility between the two sects in Middle east. 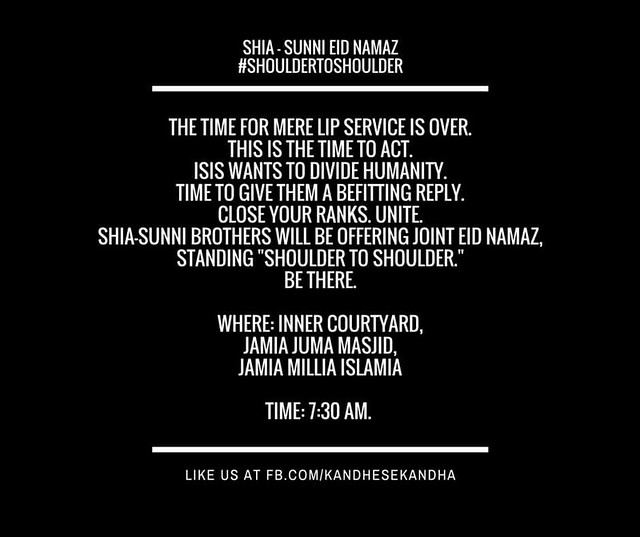 “Hundreds have been killed across the world by ISIS this Ramadan. There simple objective is to divide humanity and disrupt peace. How can we defeat their objective? It is simple, isn’t it?” reads the status of Shoulder to Shoulder Facebook page.

“Join the # ShoulderToShoulder movement. If you are in Delhi, come and stand together this Eid. Whatever your religion may be.”

The group further asks interested people to organize a joint eid prayer in their respective cities.

“If you are not in # Delhi, organize a joint prayer in your city as well or just upload your photograph online with a friend from another religion/sect with the hashtag #ShoulderToShoulder,” the group writes on its Facebook page.

The prayers will be held on Thursday, July 7, in the Inner courtyard of Jamia Juma Masjid, Jamia Millia Islamia, New Delhi at 7:30 am.