India has been a great nation for ages and will continue to be one. It is one of the few nations on earth where “respecting the otherness of others” evolved, which is also known as Pluralism. The current government needs to learn from our history, how India together is better off than a divisive India where fellow Indians who differ are treated disrespectfully. The majority of the Hindus have a responsibility to become the voice of Hinduism that believes in respecting fellow humans, and not let  a few among them represent Hinduism. 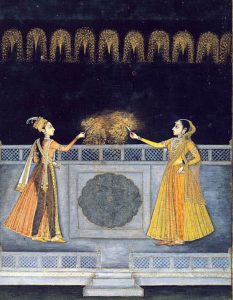 Once upon a time, Dilli as Delhi was called was the most sought after city in the world and attracted the best talent. It was always considered the “dil” or heart of Hindustan. It is still the capital of India but has obviously changed. The political, social and cultural structures have transformed considerably.

When Shah Jahan built the city of Shahjahanabad, Dilli became famous all over the world and attracted many European travellers whose accounts (in English or translated into it) tell us the story of those days. However, we hardly have books in English or Hindi, by those who lived in the city or fort, which describe the life inside the walled city. In 1857, when the British prevailed upon the “rebel sepoys” and captured Delhi after a siege of four months, they put the Mughal emperor on trial and after finding him guilty of sedition exiled him to Burma. Since then we have forgotten about the syncretic society, which flourished prior to 1857, and the interaction of the Mughal emperor with his subjects.

CF Andrews was a Church of England priest, educator, missionary who came to India in 1904 and became great friends with Munshi Zakaullah, an alumnus of Delhi College, a mathematician and social historian. Munshi Zakaullah had seen life inside the Lal Quila and had described it to Andrews.

Andrews in his book, Zakaullah of Delhi, describes the Mughal court and life in Shahjahanabad. He writes, “The intimate residence together side by side in the same city of Musalmans and Hindus had brought about a noticeable amalgamation of customs and usages among the common people… 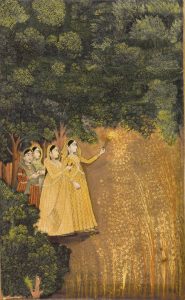 These older residents, whom I approached, whether Hindus or Musalmans, spoke about this fact with enthusiasm, and contrasted it with the bitterness of modern times.

It was quite common, for instance, in those days, for the two communities to join together in different religious festivals. Hindus would go to a Muslim festival, and Musalmans would go to a Hindu festival. This had become a natural local custom.”

I am putting down translated extracts from two Urdu books that describe that Delhi.

Bazm-e-Aakhir was first published in 1885 and was a commissioned book. Munshi Agha Mirza, manager of Muttaba Armaghan e-Dehli and Akhbar-un Nisa realised that those who had first-hand knowledge of life in the Quila-e-Mualla or Red Fort were either dead or ageing and he should get it recorded. He handed over the task to Munshi Faizuddin, who as a Mughal courtier and attendant of Mirza Ilahi Bakhsh, had spent most of his adult life inside the fort. Munshi Faizuddin describes it thus:

Lo! It’s time for the first diya. (literally it means lamp but symbolically it specifies day. Even today we have choti and badi Diwali).

Now, no one will enter or leave the royal apartments. The washerwomen, female gardeners and porters and other female servants will not be allowed to step outside the palace (seraglio). No vegetable will enter the palace. If some lady asks for brinjal, radish, pumpkin or carrot, it has to be brought in peeled for fear that someone may do black magic on the ladies inside.

It’s the third diya (badi or main Diwali) and today the badshah shall be weighed in gold and silver and a huge weighing scale is put up. The Badshah sits on one side and the other is filled with gold and silver equal to his weight. This is distributed among the poor.

One black buffalo, black blanket, mustard oil, satnaja (mixed grains), gold and silver are taken out as the badshah’s sadqa (sacrifice to avoid misfortune) and distributed among the poor people.

Orders are given for the fort to be illuminated. Kheele’n (puffed rice), batashe (candy), candy and mitti ke khilone (sugar toys), sugar cane, lemon and mud houses are distributed from house to house by jasoliniyan (female guards) and female servants.

At night, the mud houses made by the prince and princesses are filled with kheelei’n and batashe and diyas are lit in front of it. The raushan chowki, an ensemble of musical instruments, which included shehnai and drums is played in procession and the naubat (drum) starts playing in the Royal Naubat Khana.

In all four corners of the fort, a sugar cane is fixed and lemons are strung on it.

In the morning, these are distributed among the maidservants.

The rath baan (carriage driver) decorates the bulls with henna on their hooves, gilding on their horns, bells around their necks and gold and silver embroidered and tasseled cloth and parades them before the badshah and is rewarded.

Dilli ka Aakhiri Deedar was written by Syed Wazir Hasan Dehlvi and published in 1934. Syed Dehlvi was the grandson of the famous novelist Deputy Nazir Ahmed and gives an account of the Delhi about which he heard from his elders or read in books. In his own words, as recounted by his grandson Syed Zameer Hasan Dehlvi, in the preface:

These sweet tales of bygone days were sometimes found in books and sometimes heard from the lips of the older generation. My mind became a treasure house of such knowledge and I was able to pen them down.

Now that people are willing to listen to these tales I want to hear these stories in their voice.

So that all the pearls that are lying scattered all over in various books can be threaded into a necklace and made available for readers who are interested in the era which has gone by. So I am collecting eyewitness accounts.

None of us are immortal at least these stories can live.

Just as the good days didn’t last one day the memory of these days will also be erased.

He has shown Delhi’s Ganga Jamuni tehzeeb, its communal amity, colourful festivals and the cordial relations between the inhabitants of the fort and the general public.

Dussehra is here and a neelkanth (Indian roller) is let off in front of the badshah. The darogha (superintendent) of the baazkhana (falcon house) brings a falcon and hawk to the darbar and the badshah puts it on his wrist. 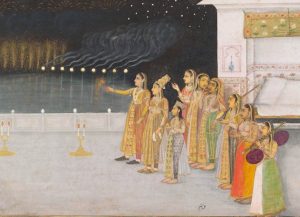 In the afternoon, the Hindu nobles offer nazar and after that the badshah comes and sits in the jharokha (balcony of the fort overlooking the Yamuna river) to watch the show put up on the sandy bank.

The people of the walled city also gather to watch the show and disperse after it ends.

The darogha of the royal stables comes with the special horses that have been decorated with gold and silver finery and colourful cloths under the jharokha. The badshah inspects them. Rewards are given to the ones with the best decoration.

The Ramleela is celebrated for nine days and on the tenth there is a Bharat Milap in which every year two brothers – Hindu and Muslim – would embrace each other with love.

Diwali has come and the sounds of drums, musical instruments and raushan chowki are echoing. Stalls with heaps of kheele, batashe, khand (loaf-sugar), mitti ke khilone and pieces sugarcane are set up.

Eunuchs are roaming the streets singing

Challa de de More Tain (Give me a ring O kind sir) and begging at the shops.

Halwais have made all kinds of sweets and their shops are attractively decorated enticing the passersby.

The light from the first diya to the last gives the impression that it’s daylight in the city.

The Quila was brightly lit and the Hindus sent trays of food for everyone. All friends set out to wish each other: They roam the city and enjoy the illumination.

The rathban and ghosi (cattlemen) coloured the hooves of their cattle (bulls, buffaloes and cows) with henna.

They were painted in bright colours and their horns were either painted silver or covered with silver foil. In their necks and hooves bells were put. On their backs were beautifully decorated cloths.

They were tinkling as they were taken out and made to dance to the sounds of drums. Everyone rewarded them.

In Dilli ka Akhiri Deedar, there is also a description of what happened after the fall of the Mughal Empire.

The book contains an eyewitness account by Aghai Begum, who was a Mughalani (probably as an attendant to a princess), who had spent her life describes how the festivals were celebrated in the Lal Quila. She speaks to the author of the book in the latter part of the 19th century when the British are in full control of Delhi and indeed India. When asked about celebration of festivals, she is nostalgic about the past and scathing about the present:

Some fair and spectacles still remain but the hearts of the people are not the same. The rich look down on the poor, and I don’t from where communal feelings have entered people’s hearts and there’s a communal divide. The Hindus and Muslims don’t visit each other anymore and at the drop of a hat are ready to fight with and kill each other. Every other day there is a street brawl and if there is a fair or a festival then it is as if the wrath of God has descended on the populace. Everyone is out of control, ready to take offence at the slightest thing and in minutes, stones are thrown, sticks are used for beating each other and in seconds there are scores of bleeding heads. Now the machine guns are out and there is a curfew in the city and jailhouses are filled up. Some are even sentenced to kala paani, some are executed; children are orphaned, women are widowed and families bereft. Instead of festivities, the house is of full of mourning.

Rana Safvi RANA SAFVI @iamrana
The writer is the author of ‘Where Stones Speak’ and other books.