The Declaration of the Báb is an occasion celebrated by Bahá’ís worldwide on May 22 annually. It is one of the nine major Baha’i holy days, on which work is to be suspended.

The holy day commemorates one of the most important events in Bahá’í history, when the Báb (1819–1850), the prophet-forerunner of the Baha’i Faith, whose title means “the gate” in Arabic, announced to an ardent young seeker named Mulla Husayn, during the evening of May 22, 1844, that he was the bearer of a divine revelation which would prepare humanity for the imminent coming of the promised one, Bahá’u’lláh. This moment is understood to be the inception of the Baha’i Faith. 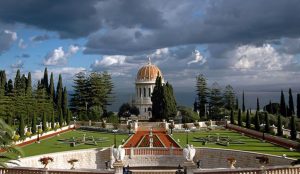 Local Bahá’í communities around the world commemorate the Declaration of the Báb two hours after sunset on May 22, with celebrations, prayers, storytelling, and reflections, usually culminating in the recitation in of what is known as the “Tablet of Visitation,” a special prayer reserved for the anniversaries of Bahá’u’lláh and the Báb.