If the Prime Minister of Canada does not take serious steps, Canada will go down in flames. This disease needs to be checked at its infancy. Cannot allow bad guys to grow in numbers.

The disease of misogyny has been around but is encouraged now.  Jokes about women, ridiculing women, and belittling women are all the tell-tale signs of weak men, men who are insecure about themselves. These men cannot compete with women on an equality basis, so they resort to belittling them as if that will make them secure – what a sense of false security these men have!

All you have to do when you hear a joke about belittling a woman is to speak up, condemn the talks that belittle women.  Ask the other person about the role reversal.   Unless we appeal to reason and logic, the gang will remain misogynist and they are a danger to women.   NBC News has dug up the story of Toronto massacre and is appended below. You can see there is a whole world of Misognyst there.

Sex education is critical to a healthy society, a mutual pleasure ensures good relationships. Men who cannot perform get frustrated with themselves, some work to rectify but many refuse to fix the problem and turn violent and reduce women to a sex object and resort to the attitudes of ‘wham bam thank you maam’ kind of guys.

Many of my friends, who are women tell me the stories of how their husbands have abused them verbally and physically, insulting them constantly. Unfortunately, these women ‘were’ taught to go along with these pigs, that ‘was’ a mistake. Do not put up with any man who ridicules women. Shamefully, these men were also taught to believe that they are superior to women.

We need to guard ourselves against diseases like Fascism, Misogyny, racism, Islamophobia, Anti-Semitism, Nativism, Homophobia. Most of these diseases have a language; they chose the words that express their disease.  Once we identify, we have to find the solutions.

These diseases are like Chicken flu, swine flu, and mad cow disease, if not treated, they will infect the entire world.  The following story brings the seriousness of the issue to the front row.

Before allegedly killing 10 people with a van in Toronto, Alek Minassian appeared to have posted a message on Facebook that linked him to a toxic online community of misogynists that has become the source of a growing pattern of violence. 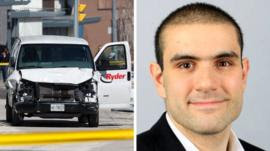 The Facebook post, which authorities who spoke with NBC News believe came from Minassian, links Minassian to an online community known as “incels,” short for involuntary celibates. The Canadian Broadcasting Corporation also reported that Facebook confirmed the authenticity of the post.

Self-described incels congregate mostly online, meeting in forums and message boards like Reddit and 4chan, and its offshoot site 8chan, to discuss their hopelessness with women in posts that are peppered with racist and misogynistic rants. “Chads” are incel-speak for good-looking men, who incels believe can’t be one of them. “Stacys” are the women who find “Chads” attractive.

The Facebook message also refers admiringly to Elliot Rodger, who killed six people in Isla Vista, California, in 2014, and left behind a manifesto and videos detailing his sexual frustration as the motivation for his violence.

Rodger has since emerged as a source of inspiration among the incel community.

“Private (Recruit) Minassian Infantry 00010, wishing to speak to Sgt 4chan please. C23249161. The Incel Rebellion has already begun! We will overthrow all the Chads and Stacys! All hail the Supreme Gentleman Elliot Rodger!” Minassian allegedly posted.

Minassian’s post spread quickly among the incel community, many of whom rushed to embrace him.

“I hope this guy wrote a manifesto because he could be our next new saint,” one poster wrote on incel.me, a forum where incels congregate.

While some posters questioned whether Minassian, 25, was a “fakecel”—the term for someone whose average looks disqualifies him from community membership—most hailed him as a hero of the movement.

“Spread that name, speak of his sacrifice for our cause, worship him for he gave his life for our future,” one poster wrote.

Slideshow preview image
28 TWEETS
Several pedestrians killed after van strikes people in Toronto
SEE GALLERY
Another poster wondered whether Minassian might have been acting on his own March call to action for incels to commit mass murder and serial rapes, a post on incels.me which has since been removed.

“I want to see some mass food poisoning deaths, maybe a pipe bomb or two, or hopefully somebody finally uses a f—ing truck to just ram down [women] during a school parade or something, mix it up a little,” wrote BlkPillPres, whose username is a nod to the black pill, lingo in the incel community for coming to the realization that a woman will never have sex with them.

Heidi Beirich, the director of the Southern Poverty Law Center’s Intelligence Project, said that the incel community mostly consists of aggrieved young men, who have found a natural home on 4chan and darker parts of Reddit.

“They’re young, frustrated white males in their late teens into their early twenties who are having a hard time adjusting to adulthood. They’re the same kinds of people you find in white supremacy writ large,” Beirich said. “They have grievances about the world they’ve placed onto women and black people.“

Beirich places much of the blame on web forums and social media platforms that don’t proactively enforce rules limiting hate speech. When asked by a Reddit user earlier this month whether “open racism, including slurs” were against the site’s rules, CEO Steve Huffman wrote in a comment on Reddit , “it’s not.”

“Reddit has basically just said ‘we don’t care if there’s bad stuff in these hate forums.’ 4chan and 8chan are completely outside the bounds of normality,” Beirich said. “When millions can be exposed to heinous propaganda, you are setting the table for ultimately hate speech and ultimately hate crimes.”

Beirich called incels a subgroup of both the men’s rights activist and alt-right movements.

“You’d be shocked at the amount of violence, raping, killing and attacking of women they advocate,” Beirich said. “In the case of Elliot Rodger, there was violence on a mass scale.”

AdChoices
Reddit banned the channel r/incels in November, citing a violation of its “violent content” rules. The shutdown followed a number of posts where members seemed to be advocating for rape and specifically one cross post in the channel r/legaladvice where a frequent r/incels poster appeared to be soliciting tips for how to get away with rape.

Quickly, members of the community moved over to r/braincels, which called itself a “fun, energizing, and thought-provoking atmosphere for incel culture.”

The subreddit, or Reddit community, has been active for over six months, and highlights the difficulty that comes with a whack-a-mole style of enforcement that Reddit and other platforms use to ban extremist groups from their sites.

A full day after the attack, a post titled “The post about the Toronto killer being an incel has been proven to be fake” remained pinned to the top of the subreddit, along with a post denouncing the attack.

The third top-rated post on r/Braincels at press time featured a cartoon of a mouse wearing a Nazi armband beneath an oven timer, titled “Hi, lurking journalists!”

Hours after Minassian’s rampage, Reddit banned “malecels”—a subreddit for incel discussion where “normies” and women were prohibited that was only live for 19 days.

In one of the final posts to malecels, a user bragged the community would “not be banned anytime soon. Even if we advocate rape.”

“The admins are only competent when they get reports and because we’ll be very vigilant of letting outsiders in there’s no way admins would ever know what’s going in here,” the user wrote. “There are far too many private subreddits for an admin to reasonably monitor.”

Minassian’s visible online footprint is small. He was briefly active on the gaming forums Steam, and once released an app through the Android app store that showed users available parking spaces in Toronto.

This wouldn’t be the first time a mass murderer blamed involuntary celibacy for his crimes.

In 2009, before the internet gave incels a known place to congregate, George Sodini walked into an L.A. Fitness gym in Pittsburgh and shot up a women’s aerobics class, killing four, including himself. Sodini left behind a blog where he detailed his plans and complained of rejection from women.

“There are 30 million desirable women in the US (my estimate) and I cannot find one. Not one of them finds me attractive,” he wrote.

Rodger, who Minassian referenced by name in his Facebook post, listed sexual frustration and a hatred for women as his chief motivation for his killing spree.

In his posts, Rodger spoke in language common among the incel and pickup communities, separating men into groups of alphas and betas and reducing women to entitlements which could be won or stolen.

Rodger closed his manifesto with: “All I ever wanted was to love women, and in turn to be loved by them back. Their behavior towards me has only earned my hatred, and rightfully so! I am the true victim in all of this. I am the good guy.”

In 2015, Chris Harper-Mercer killed nine and injured seven at a community college in Roseburg, Oregon before turning the gun on himself. In his journal, Harper wrote, “My whole life has been one lonely enterprise. One loss after another. And here I am, 26, with no friends, no job, no girlfriend, a virgin.”

In his writings, he identified with Rodger as well as other mass shooters, whom he described as “people who stand with the gods.”

breaking-news logo
Sign up for Breaking News by AOL to get the latest breaking news alerts and updates delivered straight to your inbox.

Emails may offer personalized content or ads. Learn more. You may unsubscribe any time.

In February Nikolas Cruz, the 19-year-old who shot and killed 17 students and teachers inside Marjory Stoneman Douglas High School in Parkland, Florida, praised Rodger in a Youtube comment.

“Elliot rodger will not be forgotten,” Cruz wrote.

Rape as a Political Weapon
https://www.newsclick.in/savarkars-sanction-use-rape-political-weapon