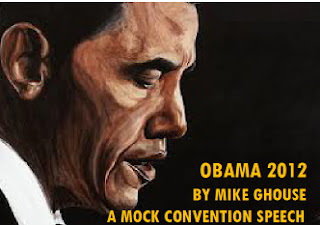 From January 2008 through March 2009, I followed Obama’s speeches, indeed, I wrote about him in advance and he spoke similar words. He is a pluralist, an inclusivist who respects the given space of every human being that God has placed on the earth. More about him and 40 articles I have written about him are linked below.

He is going to speak at the convention and I am going to write a mock speech and hoping his speech would have many elements from my speech. I will write a full speech hoping it would be similar to his real speech, as it has been in the past. Here is a sample at Dallas Morning News in today’s Texas faith column.

Texas Faith: What would you like to hear Obama and Romney say in their convention speeches?

MIKE GHOUSE, President, Foundation for Pluralism, Dallas
I hope President Obama delivers this speech to the nation.
Every day, I think about you, the 43 Million of my fellow Americans, who are patiently enduring the pain of placing food on your tables, and the sacrifices you are making daily to take care of your families.
As a society we have failed you in your pursuit of happiness, we have failed to create an aggressive environment where you can find means of earning a livelihood, and the fulfillment of a sense of responsibility to your family.
I am deeply troubled by it, like millions of you, I was not born with a silver spoon, and I understand your feelings. I am also thankful to the almighty for giving you the humility, forbearance and courage to believe in America. There is always the light at the end of the tunnel, that is indeed the commonality of our faiths, and that is what gets us going forward.
As a nation, we have two priorities; your job and the well being of you and your family.
We have a severe budget deficit, and we need funds to provide temporary relief to fellow Americans to take care of their families until there is a source of income for them. I will not let you down, and let you suffer more than what you already have. I will fight with the congress not to cut benefits to you.

By the way, Republicans are not wrong at all in reigning on spending, let me correct this notion, it is just not the Republicans, but every Democrat and every American believes in that, and you as an individual and a family lives within your means. Shouldn’t we?

We are all in this mess together, and as Americans we have a moral responsibility to take care of each other with our basic needs, everyone has to survive, not just the fittest ones with safe havens.

We have to raise funds or borrow it to survive until things get better. The short term solution is to ask every able American to continue to contribute in creating jobs, but also pay the same percent of taxes as every American does, whether your income is moderate or beyond imagination.

This paragraph is an add on, and not in the Morning News; If you are making $48,000 a year, more than likely you will end up paying $9,600.00 with 20% net tax rate, what if you pay $6,720 at 14% rate, would the additional $2,880 help you pay the bills? Forget the luxury, will it help you “survive” and take care of your family? You pay your taxes generously. If you make $23 Million a year, and if you pay like everyone else, you will contribute a fair share to the economy and we can pull it through equitably with the shared pain.
We need to be a healthy nation to sustain productivity, investing in your health through the health care reforms is the right thing to do, so you can focus on productivity rather than spend time worrying about how to take care of your loved ones.
We can stabilize our economy without repealing the good things working for your future, and as your president, I want to leave you prosperous, just like President Clinton did. Here are my specific plans and hurdles I face for the next four years and I need your vote of confidence for four more years.
Texas faith is a weekly column, where panelists from different traditions respond to the issues of the day – for all the responses, please visit Dallas Morning News at
http://religionblog.dallasnews.com/2012/08/texas-faith-what-would-you-like-to-hear-obama-and-romney-say-in-their-convention-speeches.html/
Please join us for Unity day on Tuesday, September 11, 2012 at 11:30 AM at Unity Church of Dallas – details at www.UnitydayUSA.com
MORE ABOUT OBAMA – MY PERSPECTIVES

At 10:00 PM on Wednesday, January 3, 2008, history was made. Democratic candidate Barak Obama, an African American was declared winner of the Iowa caucus for the Democratic Party. January 3, 2008 will be written as a golden day in the civic History of America. 97% of the nearly 3 Million Iowans are rural conservative white folks. On this day, they have fulfilled a larger dream for the world by choosing Obama in Iowa caucuses; it was a major leap in the annals of human civilization, where color of the Person or ethnicity did not matter. What he can do for the country mattered.

Since then I have written nearly 40 articles about him, have cheered for him, criticized him and held two rallies and voted for him in 2008. He has disappointed us, and to be fair, it could have been worse with McCain going to another war in Libya, Egypt and elsewhere to show off our might, but destroy America from within. What good is the war, when it weakens the average American family with a loss of job, home and his or her savings? Obama had his domestic priorities screwed up. I did not want to vote for him this term, even though I liked him.

I was looking for a candidate among fellow Republicans; I was banking on Romney, the only non-extremist candidates among the few left, he looked good amidst them, but when he added Paul Ryan to his ticket, I waited with disappointment for some good statements and held out till Saturday, August 25, 2012 in vain. But when I saw the disgusting dishonest film about Obama on Saturday, I realized between two evils, my country is better off with lesser evil; Obama.

# # #
Mike Ghouse is committed to building a Cohesive America and offers pluralistic solutions on issues of the day. He is a professional speaker, thinker and a writer on pluralism, politics, civic affairs, Islam, India, Israel, peace and justice. Mike is a frequent guest on Sean Hannity show on Fox TV, and a commentator on national radio networks, he contributes weekly to the Texas Faith Column at Dallas Morning News and regularly at Huffington post, and several other periodicals across the world. The blog www.TheGhousediary.comis updated daily.