Pluralistic solutions have the power to sustain and take us into the next century with relative security, peace and prosperity. We cannot have peace and security when we do injustice to others.

Mike Ghouse is a speaker, writer, thinker, futurist and an activist of Pluralism, and Civil Societies passionately offering pluralistic solutions on issues of the day.

He is a commentator at Fox News on the Hannity show, nationally syndicated Radio shows along with Dallas TV, Print and Radio networks and occasional interviews on NPR. He has spoken at international forums including the Parliament of Worlds Religions in , Middle East Peace initiative in , International Leadership conference in , and elsewhere.

Concerned by the divisiveness, he saw the need to bring Americans together and founded America Together Foundation committed to building a cohesive , indeed it is in response to ACT America which is bent on pitching one American against the other. We will be holding series of educational programs, conferences and workshops to address the issues that divide us such as Civil Right, GLBT, Quraan, Abortion, anti-Semitism, Islamophobia, Racial Profiling and Stereotyping.

The Annual Unity Day USA is in its 7th year now, it is a purposeful event to bring Americans together, on this Unity Day, we the people of the of every faith, race, ethnicity, culture and background will gather to express our commitment to co-existence, unity, prosperity and wellbeing of our nation.

Thanksgiving Celebration is in its 15th year showcasing cultural diversity.

The 5th Annual Reflections on Holocaust and Genocides is to learn and to acknowledge and reflect upon the terrible things we have inflicted upon each other and commit to avert such tragedies. Through this event non-Jewish people have consciously learned about Holocaust for the first time, it was also for the first time that people of 14 faiths came together to join in to commemorate the Holocaust that commemorated within the Jewish Community for years. They are not alone anymore in their anguish, we are all in it together with them, and it is a Muslim initiative to effect a positive change.

Two books will be released this year; The American Muslim Agenda and My Journey to Pluralism.

Mike has written over 1000 Articles on Pluralism, , Peace & Justice and civil societies published in a wide spectrum of Newspapers and Magazines around the world.

Locally, he is a panelist at Dallas Morning News’s and writes weekly on a range of issues facing the nation. Washington Post, Huffington Post and other news papers and sites regularly publish his work.

Mike is available to speak on Pluralism, Islam, Civil Societies, and Peace & Justice at your place of worship, school, work place, seminars, workshops or conferences. His work is reflected at three websites & twenty two Blogs listed at http://www.MikeGhouse.net/

# # #
Mike is an organizer of events, conferences, workshops and lectures to impart the values of pluralism at work, places of worship and the society at large, He is a conflict mitigater and a goodwill nurturer and believes that by learning to respect the otherness of others and accepting the God given uniqueness of each one of the seven billion of us, conflicts fade and solutions emerge.

He has dedicated his time to work with the leadership in offering insights and solutions to effectively managing the multi-religious, multi-ethnic, and multicultural societies.


The following events were initiated, organized and established with the theme of bringing diverse people together to learn and to know about each other.


Annual reflections on Holocaust and Genocides since 2007; <憼ˢ>
The mission is to create awareness of the inhumanity in us and find solutions for peaceful co-existence. Mike believes that, “we cannot be safe, unless others around us are not” ( ADD LINKS – TJP – DMN 2009 – DMN 2006 – Survivors–Jewish Post – Fox TV )

The annual Unity Day USA took root in 2005, on this Unity Day USA, we the people of the of every faith, race, ethnicity, culture and background will gather to express our commitment to co-existence, Unity, safety, prosperity and well being of our nation with liberty and justice for all.

The Annual Thanksgiving Celebrations began in 1993 to bring immigrant, indigenous and born Americans together. The purpose of celebrating this event is to give thanks to the creator for the blessings of precious life while enjoying the cultural heritage of each ethnic group.

“Wisdom of Religion” – all the beautiful religions of the world was an hourly Radio talk show broadcasted daily. Over 700 hours of educational programming was relayed learning about religious, humanistic and the pluralistic traditions.

“Festivals of the World” was a weekly Radio program on Saturdays, where the essence of every festival was shared, so we all can have an idea of how other people celebrate or commemorate their holidays. (more on right panel)

Mike’s purposeful presence in the media is to foster critical thinking. He is blessed to have been given the time on national and local TV, Radio and Print medium to share pluralistic solutions on the issues of the day.

Pluralistic solutions have the power to sustain and take us into the next century with relative security, peace and prosperity. We cannot have peace and security when we do injustice to others.

Mike Presides the Foundation for Pluralism championing the idea of co-existence through respecting and accepting the otherness of other. 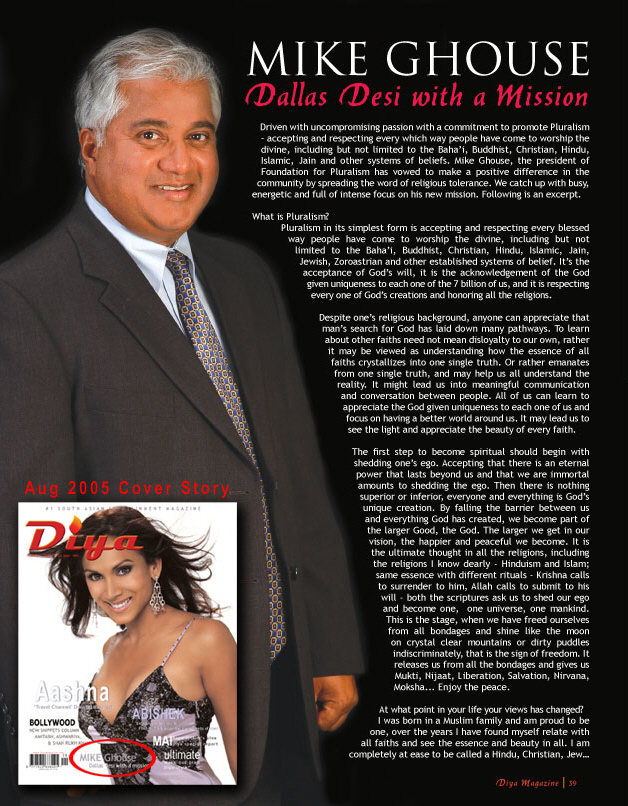 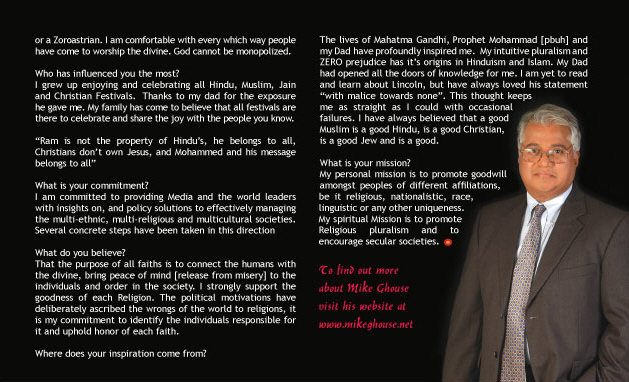