The most powerful words in human history of governance were uttered for the first time on November 19, 1863 in Gettysburg.  President Abraham Lincoln at the dedication ceremony of the Soldier’s National Cemetery at the scene of the Battle of Gettysburg of the American Civil war said these words among the 272 words speech, “That this nation, under God, shall have a new birth of freedom – and that government of the people, by the people, for the people, shall not perish from the earth.” Indeed, it will not perish and those words gave the world a new way of governance where people determined how they wanted to live rather than dictated by a King, tyrant or a fanatic religious man.

Wednesday, April 26, 2017 was a historic day for me too. I visited Gettysburg, a place that I consider holy, for it changed the course of history and gave a new meaning to governance.  Even though United States is the first country in the world to initiate and practice democracy, the words to describe that form of governance came 87 years later for the world to fully grasp the idea of Democracy. 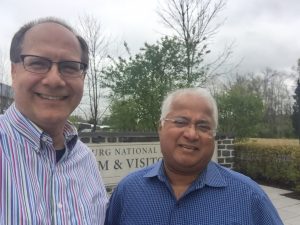 Had it not been for my friend Pastor Jim Eaton’s mention of Gettysburg, I would not have made the pilgrimage.  He said, “It is only 45 miles from here” (Frederick) when I visited the Mosaic Church for Easter services.  Thanks to Jim for the worthwhile trip and learning about Lincoln. We learned about each other as well – he is an Evangelical Pastor and I am a Public Muslim.  We were not that off in most aspects of life.  Oddly, I mentioned that I cried when Mandela was released from the Prison, when Obama was elected, he choked me with tears and the whole world cried for the hope it brought to mankind, especially the minorities around the world; White, Black, Brown or Yellow.  He felt the same about these events and of course we both are admirers of Lincoln.

The Film, Cyclorama & the Museum were worth visiting.  The theater is a full circle, it goes all around you and the screen (does look like real Gettysburg) Mural is 42’ tall by 300 some feet around.  It is a massive screen and darn it, the painting looks so real, and so unbelievable.  They re-enacted the battle and you have to see it to feel it.

Pastor Jim Eaton said, he and his wife Natalie drive over there once a while and meditate and pray and walk around the grounds and reflect on life, Lincoln and Democracy.  I can see that, it was awesome and a thought provoking trip.  Back in Dallas, Najma, my late wife and I used to take a frequent trip to a town called Salado south of Waco, and she would come alive when we sat by Serena, a Bronze mermaid in a shallow river with our feet dangling in the water. I wish all couples find a place to visit once a while to give that sense of peace and sense of connection.

We went around the battle fields and the memorials – Architecturally the Pennsylvania Memorial looks fairly similar to many tombs in India and Persia (picture attached).

The biggest discovery for me as well as Jim was Texas was on the confederate side of the war (Picture attached – Defense of Little Round Top) and I just could not believe it.  By the way I am related to General Robert E Lee through my kids maternal Grandparents, he was a great great grand uncle. There is one picture of his bed included in the pictures.

There were several other issues we talked in six or seven hours we were together – those were momentous moments of life.  We have learned to understand and accept our differences respectfully without compromising on our faith traditions. You are who you are, and I am who I am, that’s how God has made us, when we respect the otherness of others, conflicts fade and solutions emerge.   We talked about our famous Evangelical Pastor friend Bob Roberts who is instrumental in promoting the ideal mentioned above, and both of as admire him and here is my dedication of a chapter in Quran to Bob Roberts.

The name Gettysburg evoked a lot of sentiments for me.  I learned about Lincoln’s Speech in my High School way back in early 60’s and then it was reinforced by Dale Carnegie in his book about winning friends.  To honor Lincoln, at the Center for Pluralism we have a dedicated every year to learn about his wisdom among other religious, political and civic figures.   What a joy it was to stand on the ground where Lincoln had stood once to deliver that famous speech and I am blessed to have stood on the same steps of Lincoln Memorial where Martin Luther King delivered his famous speech, “I have a dream,” and mine was a dream to see a cohesive America in my life time.

With the exception of a few years, almost all of entire history is flooded with Kings and Dictators, who took over power by hook or crook.  One of those exceptional periods is what Muslims call “Righteous leadership” as they were elected through a process of consultation rather than passing it on within the family or taking over by power.   That lasted for 40 years and after that the Monarchies took over and democracy became a history for Muslims. Of course that was the case with all nations.

The first nation on the earth to have initiated governance of people was the United States –240 years ago.  UK and other nations followed it much later, and Muslim nations did not get democracy until 1930 with Turkey leading it, and then it took another 15 years for Pakistan, Indonesia and other nations to follow the suit. Someone can check on me on this – May India was the first major nation after the United States to free herself from the clutches of Colonialism and form a democratic government, and other nations followed that within 10 years of India’s independence.

Those words of Lincoln, “Government of the People ……”  have been resonating with me since High School and then in my college days, there are few things I have adopted from Lincoln – “with malice towards none” being one.  I hope my kids will inscribe that on my headstone.

Lincoln took bold steps in dealing and abolishing slavery.   This is one of the most significant events of human history where the hitherto “less than” humans were considered equals. No one was ever less than the other, but the men in power usurped the rights of the weak and Lincoln restored their God-given inalienable rights.   His approach was taken as destroying the slaved labor businesses; he was ridiculed and even killed.

Ironically, you see almost identical words used against Prophet Muhammad when he talked about abolishing slavery.  Prophet Muhammad (pbuh) was equally ridiculed with almost the similar language.  The business people of Mecca were hell bent on eliminating as he was advocating freedom of slaves and treat them as equals.  (The movie Message by Mustafa Akkad has the dialogues:  https://www.youtube.com/watch?v=_7LRCG1AhWQ ).  He further irritated the elite in Medina by asking Bilal (freed slave) to do the first call for prayers.  The elite thought that they should have the privilege and Muhammad (pbuh) wanted to establish equality of mankind by giving Bilal one of the highest status in God’s Kingdom.  Indeed, in the rituals that Islam has prescribed, the overarching idea behind them is to imbue a sense of equality.  He believed humility builds bridges and arrogance kills relationships.

America is an ideal nation with built in anomalies, and as Americans we have to work with malice towards none and embrace all of God’s creation. If we think less of any one, then we are plainly saying God has screwed up. Does God Screw up? Hell No.  we have to honor and respect the uniqueness he has given to each one of us, which would to highest form of worship.  Hey God will be happy with us if we respect his creation.  Won’t he?

A chapter on Civil Dialogue in Quran –  http://worldmuslimcongress.org/sura-kafirun-un-believers-a-chapter-in-quran-about-civil-dialogue-and-pluralism/

Obama Choked me with tears – http://mikeghouseforamerica.blogspot.com/2008/11/president-obama-choked-me-with-tears.html 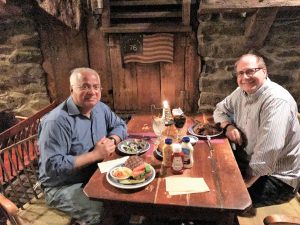 Closing the trip was at the Dobbin House Tavern, operating since 1772 (yes, 1772) quite a historic place.  We discovered another thing about us – Neither of us I drink alcohol; people assume that “Christians” have no restrictions, that is not the truth.  They don’t drink and there are many who don’t and Muslims don’t drink either, not all of them though.  He went for the spit roasted Chicken and I took a medium rare Hamburger, it was great.

Right to life, liberty and pursuit of happiness is explained in the following 3 minutes humor video

Dr. Mike Ghouse is President of the Center for Pluralism, deeply committed to its mission of building a cohesive America. He is a pluralist, thinker, writer, activist, motivational speaker and a news maker. He offers pluralistic solutions on issues of the day. More about him in 65 links at www.MikeGhouse.net