I will be writing a series of short dialogues that take place between individuals when they meet for the first time. Mind you, these are individuals who are committed to learn and obviously stumble. The purpose of this for each one of to become capable of relating with fellow humans no matter what race, region or religion they belong to, as we have to work together.

John: It’s nice to meet you Mr. Singh, we are all monotheistic faiths, and we have so much in common!  (John is a Christian meeting a Sikh for the first time and had a little knowledge about Sikhism).

Mike:  C’mon John, what would you say if he were a Hindu?
John: Don’t Hindus worship many Gods?

Mike: Yes, Hindus worship different manifestations of God, but they believe in one ultimate Creator. They simply see the creator represented by different aspects of life, and you see it all wrapped in one.

John: Polytheists?  (He did not sound pleased with the word)
Mike: Why is it wrong? As humans we believe in NO God, ONE God and Multiple forms of God, does God change because we believe differently? or It is just our belief?

John: How do I deal with them then?.
Mike: Just like another human; respectfully.  So what if he believes in many God’s. No one’s faith is certified to be the ultimate truth (by others). As a Muslim my faith works for me, as your faith should work for you, and a Hindu’s faith works for him. Faith is a not a product to measure its worthiness, because it is a belief.

John, part of the learning is – we treat all humans as equals, when we do that, we are expressing humility, any sense of superiority amounts to arrogance, which without doubt creates conflicts.  Religion is about bringing peace to each one of us from within, and with others.

For that, we have to learn to respect the otherness of others and accept the God given uniqueness of each one of us, then conflicts fade and solutions emerge. 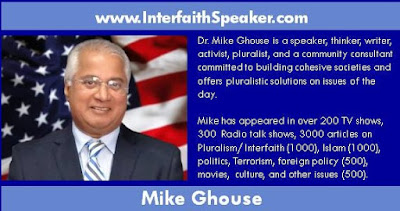