JIDS’  next dialogue will be on Sunday, January 15 at 2:30 p.m. We will be meeting at the McLean Islamic Center, 8800 Jarrett Valley Drive Vienna VA 22182 (only about a mile from Tyson’s Corner). Our topic will be “Who Speaks for Islam/Who Speaks for Judaism.” We may address such subtopics as: Wh 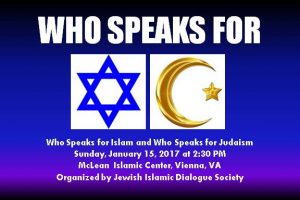 at defines Judaism or Islam? Its text?  Its history?  Its spokespeople?  And which spokespeople? Is it defined instead by the majority of those who currently self-identify with it, even if they are not clergy or recognized lay leaders? And how can we tell which imams, rabbis, or other “experts” quoted in media are legitimate spokespersons and which are not?

I think you can count on our January 15th dialogue being a lively one. While I won’t presume to speak for my Muslim cousins on this topic, I can definitely say that in Judaism there is quite a passionate internal debate as to what Judaism stands for and who is qualified to determine what it stands for. We will address some of those debates, and also consider the extent to which Islam faces similar issues.

We have now firmed up the four speakers for this dialogue.  Rabbi Nissan Antine is the Senior Rabbi of Beth Shalom Congregation in Potomac, Maryland.  He received his rabbinic ordination from YCT Rabbinical School and had previously studied in  various yeshivot in America and Israel, after graduating with a degree in Philosophy and Religion from Case Western Reserve University.  He is currently the president of the International Rabbinic Fellowship, a rabbinic organization with over 180 members.  Rabbi Antine was a fellow at CLAL, an interdenominational Jewish think tank, and is very passionate about making the messages of Judaism relevant to Jews across the religious spectrum.

Rabbi Michael Feshbach is the Senior Rabbi at Temple Shalom, in Chevy Chase, MD.  He is also a Senior Rabbinic Fellow at the Shalom Hartman Institute of Jerusalem. Over the course of his career, Rabbi Feshbach has achieved recognition as a contemporary Reform Jewish scholar through online columns and “Ask a Rabbi” responses, both for the Union for Reform Judaism and in the early days of America Online. Before coming to Temple Shalom, Rabbi Feshbach served congregations in Boca Raton, Florida; Erie, Pennsylvania; and Buffalo, New York.

Dr. Mike Ghouse is the Executive Director of the American Muslim Institution and President of the Center for Pluralism.  He is a community consultant, social scientist, writer and speaker who is a frequent guest on radio and television programs, including the Sean Hannity Show.   Dr. Ghouse has conducted workshops on various religious perspectives, ranging from atheism to Zoroastrianism.  He is committed to building cohesive societies and offers pluralistic solutions on issues of the day.

Dr. Sahar Khamis is an Associate Professor in the Dept. of Communication at the University of Maryland.  She is an expert on Arab and Muslim media, and the former Head of the Mass Communication and Information Science Department in Qatar University. Dr. Khamis co-authored two books: Islam Dot Com: Contemporary Islamic Discourses in Cyberspace and Egyptian Revolution 2.0: Political Blogging, Civic Engagement and Citizen Journalism. She is also a member of the editorial boards of several journals.  In addition, Dr. Khamis hosts a show on “U.S. Arab Radio,” the first Arab-American radio station broadcasting in the U.S. and Canada.

Last week’s Imam-Rabbi Summit was a great success, with over 100 participants and lots of enthusiasm. Ira Weiss produced a video reflecting portions of the program, and you can view it here:  https://youtu.be/5y0D7qO7eHc

I was given the opportunity at the Summit to make an argument as to why bi-lateral Muslim-Jewish engagement in particular is so important.  You can find a loose transcript of that argument attached.  In addition, every community represented at the Summit was asked to identify two Muslim-Jewish Engagement Coordinators.  If you personally would like to be involved in furthering Muslim-Jewish engagement in our area, either on behalf of a congregation or otherwise, please e-mail me and let me know about your interest.  Now is definitely the time to get involved.

I hope that whets your appetite for the January dialogue.   In the meantime, stay warm, and have a great December.