The following from the Federal Reserve gives us those answers. There is a lot to unpack in this report, but for purposes here we will only focus on gains/declines in wealth for the years 2007-2019.

As can be seen by the chart, the years 2007-2010 saw declines of 20% or more across all ethnicities, which was due to the housing crises. For the time period of 2010-2013 which was under the Obama Administration; Blacks, Hispanics, and “Other” will still seeing declines in wealth while Whites were experiencing miniscule gains. From 2013-2016 gains were made across the board with “Other” leading the way, followed by Hispanic, Black and then White. From 2016-2019 gains were greatest for Hispanics far outpacing the 40% plus the previous four years to over 60% for this group. Blacks were next at around 35% outpacing their gains in the prior four year period also, while Whites actually lost ground in their gains by about 80%. 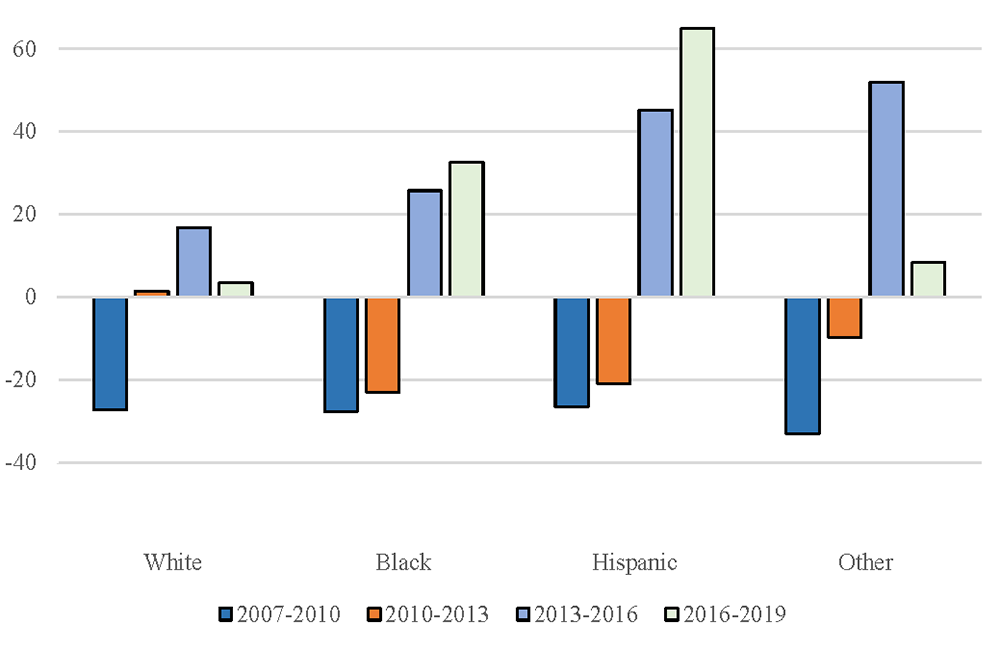 Obama’s economic policies were slow to take hold, which took more than 4 years to see gains in ethnicities other than White. Trump’s economic policies saw the greatest gains for Blacks and Hispanics, while slowing down substantially the gains made by Whites and “Other.”

Note: This is a preliminary analysis only and tying these changes in wealth by ethnicity to specific policy changes of each administration, which would include the specific changes implemented, timing there-of, among other factors would need to be done to give us a clearer picture of the inner workings of the macro-economic transformations at work in each of these time periods.

Sam Madden is a Co-Director for the Center For Pluralism in Washington, D.C. He can be reached at sam@centerforpluralism.com. His research also appears at https://www.researchgate.net/ which is based in Berlin, Germany and has 76 Nobel Laureates on its site.

If you would like make a tax deductible contribution to the Center For Pluralism to help continue their mission please visit, https://centerforpluralism.com/donate/