Tippu Sultan’s vision of India was Swaraj (self rule) not British Raj. He was killed in the 4th war of Mysore against the British on this day, May 4th 1799. History records that his confidant and assistant leaked the information to the British about Tippu’s whereabouts and that’s how the native kingdom fell to the colonists. 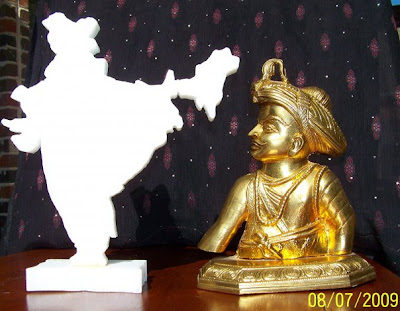 Indeed, when my father was running for the City council, it was festivity at our home, the public address systems (we called it loud speakers then) were set and Lavani (folk singing in Kannada Language) were sung, how Mir Sadiq, Tippu’s deputy betrayed him. I am trying to recall that in Kannada with failures. My father was also elected Mayor of the city back in 1952, and he was elected on the day I was born or vice-Versa.

Tippu was a secular King in the times when it was not a common thing. Dr. Gowda’s research is an eye opener. Unfortunately, a few right wingers in India have maligned him for the excesses’ done by his fanatic deputies in Kerala and Mangalore, where they forced Hindus and Christians to convert to Islam. On the contrary, Tippu granted lands to build temples, and he defended the Sringeri Matt (Hindu Sanctuary) from attacks from Marathas, and has protected the Ranganatha Temple in Srirangapatna. Indeed, the first Christian church in the state was built in Mysore City with a land grant from Tippu Sultan that was before the British invaded. His deputy Poornayya was a Hindu.

In a free society, falsities come with the facts, and we have to live with it. I have been to all his places. Indeed his Toop Khana – the artillery depot sat next to my house in Yelahanka, the wall of our house joined the wall of Tippu’s depot known as Chattra now – where they conduct weddings, and my sister’s wedding was conducted in it and my best friend Jaichand Sugalchand Sajjanraj Jain’s wedding was also conducted there.

When I was a kid, I messed with everything my Dad did, in front of our house, while digging for a wall, I jumped into the trench to dig foundation with axe, boom, one hit, and there was a massive hole. I screamed and came out of the trench, later it took truck loads of dirt to fill it in. and they said it was Tippu’s tunnel. No one verified or reported that to anyone. Unfortunately that is not a custom in India. We don’t value the old stuff unlike here in America, which would have become a heritage.

The house we lived was the house where Kempe Gowda, founder of Bangalore lived. I have asked my nephew to save the 500 year old rosewood columns and the arches, and I hope to do something with it. It is historical.

Tippu goes on the record as the only 2nd head of the state in human history that was on the front line of battle field defending his state. He also has a record among all the British colonies to be the only one who captured and imprisoned the British soldiers.

The Kingdom of Mysore was also among three nations in the world that recognized American Independence and apparently July 4th was celebrated in Sri Rangapatna, the State Capital of Mysore in 1776.

Don’t forget he is the father of Rockets and inventor of Torpedo, known as Bangalore Torpedo. The British and American scientists have given him due recognition. Indeed, India’s first satellite was made in Bangalore as well.

……. Mike Ghouse is a speaker, thinker and a writer on pluralism, politics, peace, Islam, Israel, India, interfaith, and cohesion at work place. He is committed to building a Cohesive America and offers pluralistic solutions on issues of the day at www.TheGhousediary.com. He believes in Standing up for others and has done that throughout his life as an activist. Mike has a presence on national and local TV, Radio and Print Media. He is a frequent guest on Sean Hannity show on Fox TV, and a commentator on national radio networks, he contributes weekly to the Texas Faith Column at Dallas Morning News; fortnightly at Huffington post; and several other periodicals across the world. His personal site www.MikeGhouse.net indexes all his work through many links.