3,300 Americans have been killed in violence since the Newtown Massacre. Was the Newtown killer, Wisconsin shooter or the Denver murderer authorized by Americans Christiansto kill? American Muslims did not authorize Major Nidal and Faisal Shahzad either. Indeed, if they had any inkling, they would have been the first to report them to the FBI. Timothy McVeigh was a looney and acted on his own, so are the Tsarnaev brothers who acted on their own – continued: http://theghousediary.blogspot.com/2013/04/texas-faith-righteous-mind-of-tsarnaev.html 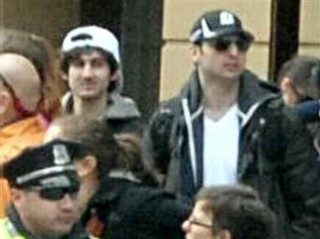 Texas Faith: The Righteous Mind of the Brothers Tsarnaev
By Bill McKenzie/ Editorial Columnist | Published 11:46 AM -04/23/2013

The part of the Boston story that mystifies me is how two brothers reportedly led fairly normal lives after they came to Boston, but then something flipped and their thinking grew rigid. So rigid that they decided to blow up innocents along the Boston Marathon route in order to make a statement.
How does something like that happen?
Jonathan Haidt argues in his book The Righteous Mind: Why Good People are Divided by Politics and Religion that the righteous mind can readily shift into combat mode in political and moral arguments.We launch rhetorical grenades, which impress members of our own group, writes Haidt. But that does little to change the minds of our opponents, especially if they are in combat mode, too.
Of course, the Tsarnaev brothers did more than launch rhetorical grenades. They chose murder over the hard work of persuasion.
“If you really want to change someone’s mind on a moral or political matter,” Haidt counters, ” you’ll need to see things from that person’s angle as well as your own. And if you truly do see it the other person’s way — deeply and intuitively — you might even find your own mind opening in response.”

In other words, it is risky business trying to persuade people. The

may prompt us to change our own minds, which can be unsettling.”
So, here’s the question for you: Is it possible to keep the combat mode of the righteous mind from kicking in? If so, how?

America’s success in creating a cohesive environment to work and function effectively has hinged on a can-do attitude. Indeed, we have a choice “to keep the combat mode of the righteous mind from kicking in” or we can opt to let things go sour. But at the end, we have to restore the balance. We cannot function in a chaotic society.
Jonathan Haidt’s statement is certainly unsettling. The idea of seeing another person’s angle takes time, patience and humility. There is a fear in us, that knowing another point of view might change us, and we strongly resist it. On the surface, it amounts to self-negation, compromise or giving up on our own values, but shamelessly some of us demand the same from others.
The Tsarnaev brothers chose murder over the hard work of persuasion. They simply did not understand how democracy functions.
The Muslim community has done everything possible to guard the safety of fellow Americans, and nearly all of the bad guys caught by the FBI were reported by Muslims. Indeed the NYPD surveillance report violated civil rights, but the outcome absolved the Muslim community from radicalization.
GOP Rep. Peter King, chairman of the House’s homeland security subcommittee said this week: “Ninety-nine percent of Muslims are outstanding Americans, but the fact is, that’s where the threat is coming,” and added, ““If you know a threat is coming from a certain community, that’s where you look.”
As a Muslim I welcome this with a caution to Congressman Peter King: No witch hunting, sir. You will do more harm to the cohesive fabric of America than those terrorists could ever do. Please heed the wisdom of Martin Luther King Jr. He said “Injustice to one is injustice to all.” Inflicting apprehension on Muslims is drilling fear in all Americans.
Since the Newtown massacre, 3,300 Americans have been killed in violence. Was the Newtown killer, Wisconsin shooter or Denver murderer authorized by American Christians to kill? American Muslims did not authorize Major Nidal and Faisal Shahzad either. Indeed, if they had any inkling, they would have been the first to report them to the FBI.

Timothy McVeigh was a looney and acted on his own, so are the Tsarnaev brothers who acted on their own. US News on NBC reports that Dzhokhar has admitted to acting alone.
As a society we need to make an effort to be inclusive in everything we do, from schools to places of worship and work place, a new culture of cohesiveness needs to emerge, where no one feels alienated. We need to watch for those, who have difficulty in resolving conflicts through dialogue and fall prey to the temptations of taking other’s life.

To see all the 7 responses, please visit:
http://religionblog.dallasnews.com/2013/04/texas-faith-the-righteous-mind-of-the-brothers-tsarnaev.html/

….Mike Ghouse is a speaker, thinker and a writer on pluralism, politics, peace, Islam, Israel,India, interfaith, and cohesion at work place. He is committed to building a Cohesive Americaand offers pluralistic solutions on issues of the day at www.TheGhousediary.com. He believes in Standing up for others and has done that throughout his life as an activist. Mike has a presence on national and local TV, Radio and Print Media. He is a frequent guest onSean Hannity show on Fox TV, and a commentator on national radio networks, he contributes weekly to the Texas Faith Column at Dallas Morning News; fortnightly atHuffington post; and several other periodicals across the world. His personal sitewww.MikeGhouse.net indexes all his work through many links.